Chicken wings, nachos, and pizza are the snacks most commonly associated with the Super Bowl weekend. However, in Nevada, spectators are after something a little different this year, according to Google.

According to cooking and kitchen design website The Kitchn, a recent Google Trends map for the most “uniquely searched Super Bowl foods by state” shows that Nevadans are looking to munch on “vegan cheesy bacon spinach dip” this year.

In New Mexico, sports fans were apparently after recipes for pea and peppercorn mash, in New York, it was a spinach dip highest in demand, and in Massachusets, it was gluten-free pretzels.

“Google Trends are always a fascinating glimpse into the regional delicacies and traditions, and their Super Bowl breakdown of the food searched for most uniquely in each state is no different,” notes the website. It commented, “New Mexico will both serve and have to explain to us what ‘pea and peppercorn mash’ is.” 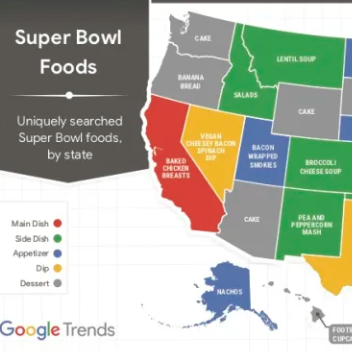 As sporting website The Comeback has pointed out, it is unknown exactly how Google comes up with its conclusions and whether every search term documented on this map was actually Super Bowl specific.

A newer updated version of the map has since been released; it shows that potato is now the most “uniquely searched Super Bowl recipe” in Nevada, and ranch spinach dip is the new favorite in New Mexico. It’s not vegan cheesy bacon dip, but it’s still not the meat-focused fest expected around Super Bowl weekend.

For those who still want to make a vegan cheesy bacon dip, recipe blog Six Vegan Sisters has created a recipe using Vegenaise, Daiya cheese, and vegan bacon by Lightlife.

U.S. consumers are becoming more conscious about meat consumption. In October, a study revealed that 60 percent of Americans are consciously cutting back for health-related reasons. “Public health messages on the benefits of reducing red and processed meat consumption may be reaching and resonating with many U.S. consumers,” said Roni Neff, an assistant professor at the John Hopkins Bloomberg School of Public Health, regarding the results of the study.

More recently, at the beginning of January, another study noted that nearly 114 million Americans will attempt to eat more vegan food this year. Again, health reasons were cited as the main driving factor behind the lifestyle change.