One day after her highly-anticipated cookbook release, vegan chef and serial entrepreneur Chloe Coscarelli popped by the New York City Twitter Headquarters to treat the employees to lunch. The chef posted a live video from the cafeteria, cheerfully inviting all “tweeps” to take a break from their desks for a complimentary and completely delicious vegan meal.

The New York Twitter office is the second largest Twitter location in the world. With over four hundred employees, this was a serious undertaking for the independent vegan chef. However, she took on the challenge with enthusiasm. In the past, she has raved about her “amazing team,” who have supported her through her countless culinary endeavors, including two different restaurant openings and several upscale catered events. The chef has cooked for the James Beard Foundation and the South Beach Food & Wine Festival. Further, she has appeared on several talk shows including Today, The Kitchen, and The Chew. She is always upbeat and friendly, happy to share her vegan cuisine with traditionally non-vegan audiences. 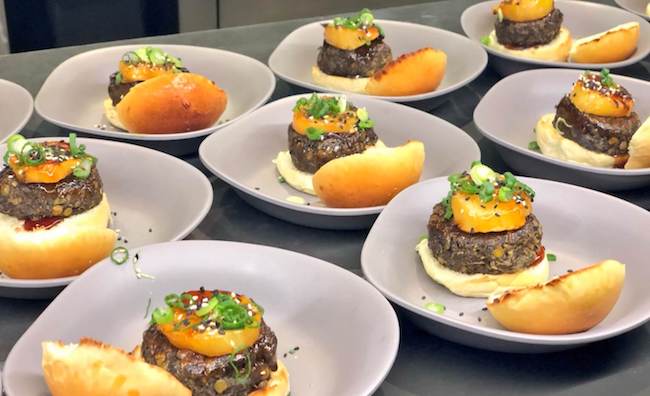 Both vegan and non-vegan tweeps got a taste of Coscarelli’s new cookbook, “Chloe Flavor,” during lunch. The chef served her Hawaiian Teriyaki Sliders, made with a teriyaki-glazed mushroom-lentil patty and caramelized pineapple slices. Employees expressed their appreciation via tweets, posting pictures of their meal accompanied by various emojis of approval.

Twitter welcomed Coscarelli in honor of their tribute to Women’s Appreciation Month. Despite her fun-loving attitude and unintimidating baby pink chef coat, this woman is a force. She has been named Forbes “30 Under 30,” written four cookbooks, opened two restaurant concepts, and competed as the first vegan champion of Cupcake Wars. Through all of her pursuits, she has changed the perception of vegan cuisine, enticing countless of omnivores with her Chloestess Cupcakes and incredibly creamy mac and cheese. In fact, self-proclaimed carnivore, celebrity chef, and serial restauranteur Michael Symon, wrote the foreword to her latest cookbook, praising her trailblazing efforts in the culinary space.

Tweeps received more than just a tasty free lunch. They were served a friendly smile, a lot of passion, and a new perspective on the plant-based lifestyle.