The chain posted an image of the No Turkey Feast sandwich on its Instagram stories, also revealing that five percent of profits from the new product will be donated to the homelessness charity, Shelter.

Marks & Spencer joins a number of other British supermarket chains and food suppliers that have already announced new vegan Christmas products. In August, Asda revealed the details of its new plant-based festive offerings, which include a Chestnut Roast, Vegan Chocolate Caramel Pots, a Vegan Pâté and even a vegan cheese board with three different types of dairy-free cheese.

The UK’s biggest supermarket Tesco has also announced the return of its popular Cauliflower Wellington dish and hinted that even more plant-based Christmas options are on the way from the chain. 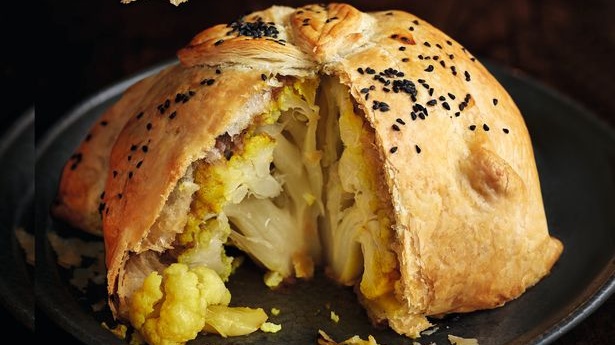 “These are changing times and vegetable dishes have now become centerpiece heroes in their own right on dinner tables up and down the country,” said Tesco’s plant-based innovation director Derek Sarno in August. “This year, Tesco’s Christmas campaign celebrates the many ways we come together at Christmas, and with the quality of vegetarian and vegan food now so good there may even be squabbles across the dinner table over who gets what.”

The No Turkey Feast sandwich, made with roasted soya protein, cranberry chutney, and spinach, builds on the Marks & Spencer’s meat-free Christmas selection, which debuted last year. Three vegetarian options were launched, in addition to one vegan option: Butternut and Beetroot Filo Parcels. It is yet to be seen if these products will be relaunched.

At the time of the 2017 launch, a spokesperson for the chain said, “The rise of the ‘vegivore’ and ‘flexitarian’ means that as a country we’re experimenting more with new vegetables and people are less afraid to try something different.”

They continued, “In the past vegetarians were limited to nut roasts at Christmas, but not anymore. Our vegetarian options are so amazing that we hope people will choose them over meat options even if they are not full-time vegetarians.”

The launch date for the new No Turkey Feast sandwich is yet to be announced.