According to vegan comedian Romesh Ranganathan, Ethiopia is “incredible for vegans.” The TV host revealed the tidbit of advice in a recent interview with Radio Times about his new BBC2 show, “The Misadventures of Romesh Ranganathan.”

The series is a three-part travelogue that takes the viewer on a trip to what the show synopsis calls“some of the most beautiful, but dangerous, places on earth.” Each edition of the new show sees Ranganathan immerse himself in the local culture by staying with a host family as he provides an insider’s guide to the country in a slight “Parts Unknown” style nod to the late Anthony Bourdain.

In each episode, Ranganathan, who described himself as “not an adventurous traveler,” visits one country. The first episode explored the Caribbean nation of Haiti. The second episode, in which Ranganathan visits Ethiopia, also proved to be a haven for promoting vegan and vegetarian food.

“It’s incredible for vegans because they fast for part of the year,” Ranganathan said. According to NPR, members of the Ethiopian Orthodox Church fast for the 40 days leading up to Christmas, which is celebrated on January 7. Devout practitioners may also fast on Wednesdays and Fridays each week but fasting, in this case, doesn’t mean foregoing all food. “Fasting means no meat and no dairy, so every restaurant and cafe has a vegan menu,” Ranganathan said. “The food was unbelievable. I loved it.” 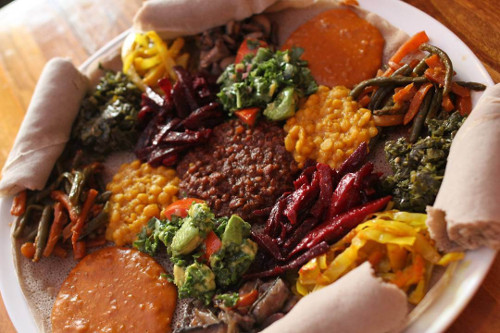 Traditional Ethiopian cuisine involves various types of spiced meat and vegetable stews known as “wat,” which are served atop a spongy flatbread made from teff flour called “injera.” Meals are served without utensils and consumed by using pieces of injera to pick up stews and side dishes. Additional injera is typically served on the side.