Dr. Joel Kahn, a well known vegan cardiologist and plant-based advocate, appeared as a guest medical professional on The Joe Rogan Experience podcast today. He was matched with Chris Kresser, an equally reputable medical practitioner, who specializes in alternative medicine and the paleo lifestyle. The men engaged in an extensive debate over the health effects of meat, cholesterol, and saturated fat.

During the nearly four hour conversation, Dr. Kahn asserted that excess saturated fat and cholesterol, which the majority of people obtain from animal sources, are related to heart disease and mortality. He cited multiple studies and the 21 international health organizations that support this claim. He also discussed the Blue Zones, which are the five unique communities around the world with the longest-living human populations. These zones are famous not only for their outstanding longevity, but also because the people eat very little to no animal products, thus limiting their intake of saturated fat and cholesterol.

Dr. Kahn has been vegan for 42 years. He joked, “I feel like the broccoli head in the United States today.” He has actively promoted a plant-based diet to both his patients and the public as a way to reduce heart disease and increase longevity. He also runs three vegan restaurants in the U.S. 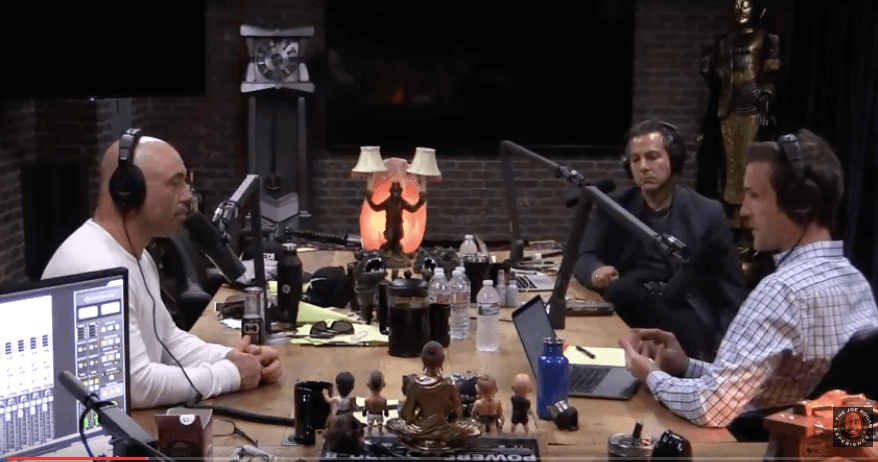 Kresser questioned Dr. Kahn’s assertions, representing the paleo community. He was actually a macrobiotic vegan before turning paleo, but he insisted that going plant-based was a “disaster” for him. Ultimately, Kresser admitted that what works for him may not work for everyone.

Joe Rogan also chimed in from time to time. Like Kresser, Rogan is an omnivore and has even developed a reputation as an ‘anti-vegan.’ Yet, in recent months he has come to respect certain experts within the vegan community.

In addition to Dr. Kahn, filmmakers Kip Andersen and Keegan Kuhn, ultra-endurance athlete Rich Roll, comedian Kevin Smith, and Cro-Mags frontman and triathlete John Joseph have all appeared on the podcast to represent the plant-based community and explain the benefits of a vegan lifestyle. The increasing popularity of vegan guests on Rogan’s podcast demonstrates his curiosity to learn more about the diet, as well as an audience demand to hear more from plant-based thought leaders.

In the end, Dr. Kahn made a simple statement. “Everybody should be jamming fruits and vegetables. Up your veggies, listeners, and you’ll counteract a lot of the crap that’s out there in the world.” Kresser consented, “I don’t disagree with that.”