Helen Pattison, the co-founder of the chocolate brand, told The Grocer that the line will feature “a collection of new products together with some of our popular favourites”.

The Absolute Black: 100% Cocoa Button Egg is ideal for those opting for “healthier food choices”, according to the brand’s website. The “all natural” Easter egg is vegan, sugar-free, gluten-free, and contains no soy. Dark Chocolate Peanut Butter Mini Egg Bags will also be available. These vegan, dark chocolate eggs are filled with salted peanut butter. Chocolate-lovers will also find several other vegan options, including Montezuma’s Dark Chocolate Cheeky Bunnies.

More consumers than ever are opting for cruelty-free purchases for a multitude of reasons, including animal welfare, environmental concerns and a desire to improve health. Pattison revealed to The Grocer that their has been “a huge demand” for vegan products as of late, while data shows that more than half of UK shoppers are adopting vegan buying behaviours.

Elena Orde, communications officer for The Vegan Society previously said: “Offering vegan food options makes clear commercial sense – businesses are opening the potential market up to not only half a million vegans in Britain, but also to a million more vegetarians, the huge number of meat and dairy reducers, the lactose intolerant, the health-conscious and others who simply enjoy vegan food from time to time.”

In fact, data indicates that in 2016 just 1% of the UK population was vegan. However, more recent research suggests that this figure has boosted to roughly 8%. It’s not just the UK seeing change; in three years alone, America has seen a 600% increase in those identifying as vegan. 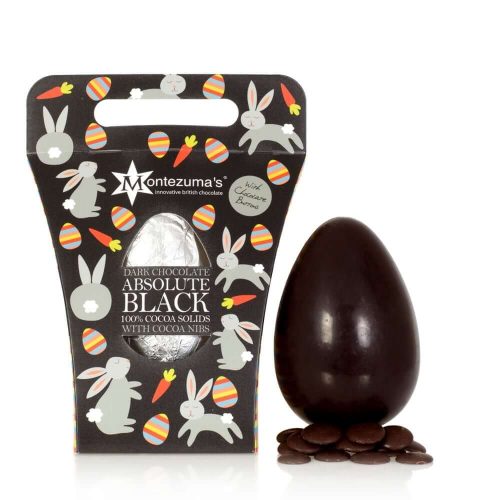 With Easter approaching, many outlets are catering for the increasing number of vegan consumers. Popular bath brand Lush recently launched 16 vegan products in celebration of Easter, while another brand launched a vegan Easter version of the popular creme egg.

The global vegan chocolate market is set to see dramatic growth, according to a January report. Meanwhile, it was found that vegan desserts are now 329% more popular on Pinterest.

The Absolute Black: 100% Cocoa Button Egg retails at £9.99, while the new Dark Chocolate Peanut Butter Mini Egg Bag can be purchased for £3.99.