According to Boston Restaurant Talk, word of the next Veggie Grill was shared in local a Facebook group, Friend’s of Boston’s Hidden Restaurants, by an undisclosed poster. Eater Boston confirmed that the latest addition to the Cambridge vegan food scene would open sometime this fall.

“We conducted market research, and our findings showed that there are a lot of mindful veggie-centric guests in Boston who are looking for our craveable plant-based food,” a Veggie Grill representative said. “In addition, our CEO Steve Heeley lived in Boston for many years and is very familiar with the market.” 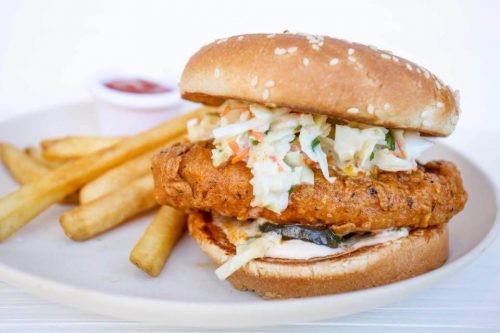 Veggie Grill’s vegan renditions of classic American comfort foods like burgers, wings, chicken sandwiches, and more has gained traction in a market where more consumers than ever are choosing plant-based when dining out. A number of omnivorous restaurants, including major nationwide chains like TGI Fridays and White Castle, have also begun to capitalize on the growing trend by adding plant-based options to the menu.

The rising demand for vegan food leaves room for vegan and vegetarian chains to grow. New York City-based vegan fast-casual chain By Chloe, for example, has opened multiple U.S. locations in a short span of time, recently opened its first UK location, and has also secured investments for global expansion. West Coast-based vegan burger chain Next Level Burger made its east coast debut in Brooklyn last year and plans to open 1,000 restaurants in the next 10 years.

In 2016, Veggie Grill announced that it had received a $22 million investment in order to take its vegan food across the U.S. By 2020, the company hopes to double its locations across the country, moving beyond its locations in Calfornia, Washington, and Oregon.

Veggie Grill began it’s eastward expansion earlier this year in Chicago, where the company plans to open four additional locations. Fans of the restaurant anticipate that more vegan Veggie Grill east coast locations will open, though no additional expansion announcements have been made.