Can something familiar also be innovative? Traditional and authentic yet creative and new? In regards to the Jackfruit Cafe, the answer is yes. Owner and chef, Angela Means, has taken the comforts of soul food and transformed these classic dishes into healthier, veganized meals. It’s the hearty food many have grown up with, yet pleasantly unique in its plant-based roots. Means opened her restaurant last year in a shared space but temporarily closed shop to open up her own venture. The new Jackfruit Cafe is being reincarnated as a food truck, and will serve the Los Angeles areas of Santa Monica, Burbank, West Hollywood, and South Los Angeles beginning July 16.

Let’s get one thing out of the way – yes, this is the same Angela Means who played Felicia in the film, “Friday.” Yes, the Felicia as in, “Bye, Felicia.” Means does not come from a professional culinary background; she is an actress and a former model. However, she grew up on a farm and explained, “Growing up on a thriving farm you learn to cook early.” 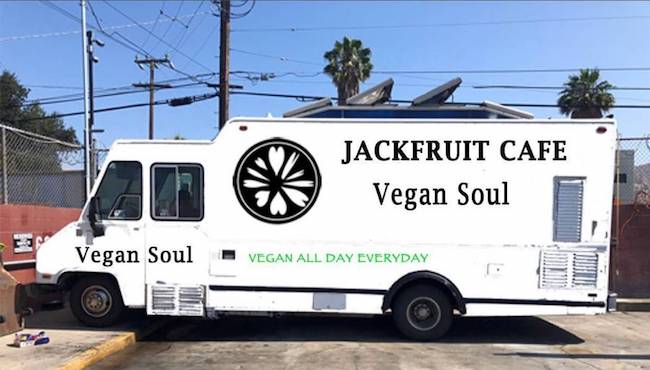 When asked about a childhood food memory, she recalled, “Food was abundant on the farm during my childhood – it just grew right out the ground. My favorite childhood food memories surround my uncle, Nathan, the most dynamic, lively, compassionate person I’ve ever known. He founded a summer day camp for our rural community and would cook daily for nearly 300 kids, sometimes feeding those kids their only meal of the day. Each one of them got a piece of fruit with their meal daily, that was really important to my uncle. I was his right hand as my love of feeding and nurturing others grew.”

Although Means pursued a different path, the Jackfruit Cafe is a continuation of her passion to nurture others through wholesome food. She said that she loves, “providing a place for those seeking vegan options [and] watching people try my vegan soul food for the first time and finding it delicious.” She has a strong connection to her community and being able to provide it with healthy, cruelty-free meals really lights her fire. “My sense of purpose is through the roof,” she stated.

Means has been vegan “on and off” for most of her life. “As a child on the farm it was traumatizing watching the animals I’d befriended disappear then finding out later we were eating them,” she recalled. Means also noted, “As a model and actor I found it best not to consume too much meat to stay fit and focused.” She’s developed quite the repertoire of recipes over the years, but she prefers to keep things simple. 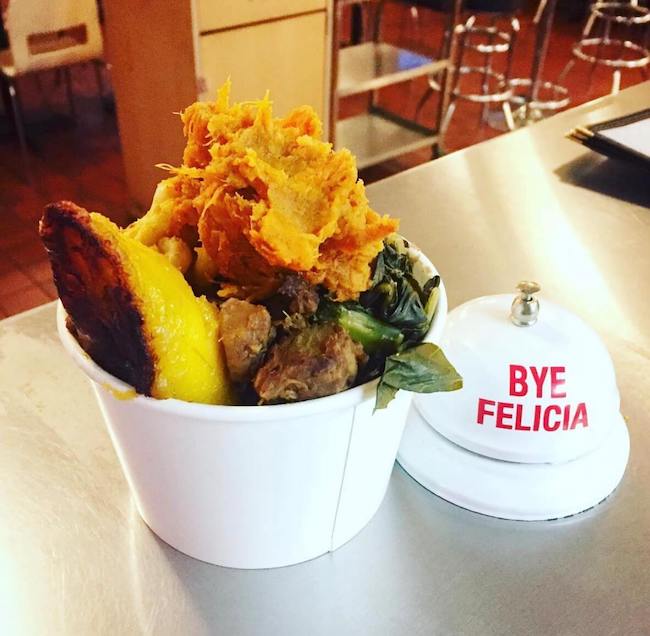 “I could eat some beans or peas every day,” she claimed. She loves slow cooking them and “being creative with seasonings.” She’s also a big fruit fan; she admitted there were times when she’d load up on fruit from the craft services table while filming and take bag-fulls home with her. Of course, she also doesn’t shy away from some plant-based comfort food. Means described her ultimate meal: “Black eyed peas, steamed-crunchy collard greens, wild rice, roasted sweet potato, cabbage slaw, a piece of plantain and some jerk or bbq jackfruit… oh and a piece of hot-water cornbread.”

Means was “inspired by the challenge” to veganize traditional soul food, and she thrives on shutting down the stereotypes surrounding plant-based cuisine. “Veganism is still new to the Hood so pretty much everyone walks in with misconceptions,” she explained. “I do a lot of sampling and will never get tired of people’s face lighting up when they realize how good Felicia can cook vegan soul food.”

The new Jackfruit Cafe food truck will be open for business beginning on July 16, making its first stop at Crenshaw Blvd. between Adams & Jefferson from 12 – 3 pm. The roaming vegan mobile will serve Impossible Burgers, ‘chickun’ sliders, and soul-inspired flautas, tacos, and burritos all stuffed with Means’ signature barbecue jackfruit.

“There is always a way to veganize any meal…you just have to be creative,” Means explained. “Doesn’t hurt staying connected to our amazing vegan community because there is always another vegan willing to help you.”