A true Valentine’s Day miracle has apparently occurred in the UK, according to the website Vegan Food UK: a vegan shopper has found what may be the first-ever vegan version of the popular chocolate hazelnut treats, Ferrero Rocher.  You know the ones — the gold-foil-wrapped chocolates with the hazelnut center delicately rolled in chocolate and bits of nuts on the outside.

The Vegan Food UK member found the vegan version of Ferrero Rocher at a Poundstretcher location.

“The actual name of the chocolates are Kavici Choco Spheres and they would commonly fall into the ‘accidentally vegan’ category as they display no vegan certification,” the Vegan Food UK reports. “Nevertheless, these choccies are vegan friendly. The full list of ingredients are: sugar, cocoa powder, cocoa mass, cocoa butter substitute, nut, wheat flour, salt, peanuts, soya, wheat and gluten.”

While the products aren’t certified vegan, they’re clearly free of any animal ingredients.

The chocolates are also free of palm oil, a controversial ingredient that some people deem vegan (it does come from plants exclusively), but others don’t because of the industry’s link to massive rainforest destruction, primarily in Indonesia. The razing of rainforests for palm plantations leads to massive habitat loss, specifically for the region’s beloved primate, the tree-dwelling orangutan. 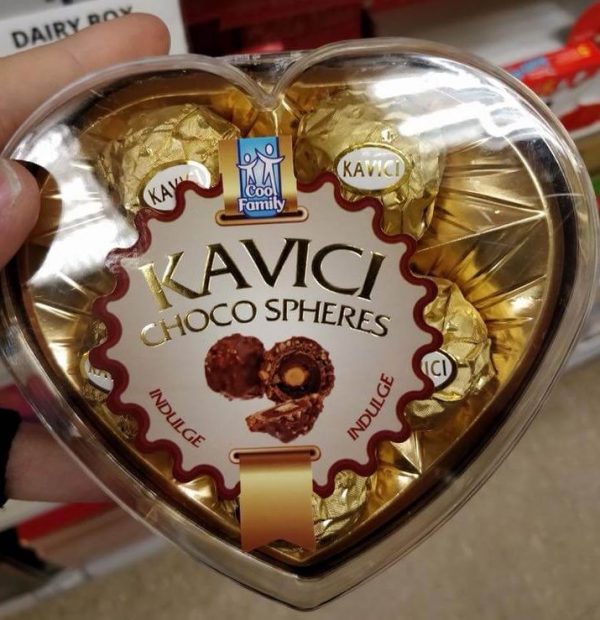 Vegan Food UK member, Ruby Miranda, spoke enthusiastically about the vegan candies, “I’m always pleased to see accidentally vegan products popping up. These mock Ferrero Rochers are a great vegan alternative and they’re so cheap! They taste amazing, pretty similar to what I remember the non-vegan version tasting like.”

It’s unclear in which Poundstretcher stores these chocolates are available, but if you’re curious to get your hands on some, you can always call ahead and ask before making the trip.

Of course, vegan chocolates are abundant all across the UK and other key markets. From the mass-produced items and niche brands, to artisan-crafted chocolate treats available online and in stores, there is no shortage of vegan chocolate for Valentine’s or any other day of the year. And, of course, you can always make your own chocolatey deliciousness.