While Flaming Grill hasn’t gone vegan like London-based pub The Blacksmith & Toffeemaker, the addition of vegan fish and chips serves as an example of the rising demand for vegan food among the nation’s diners. 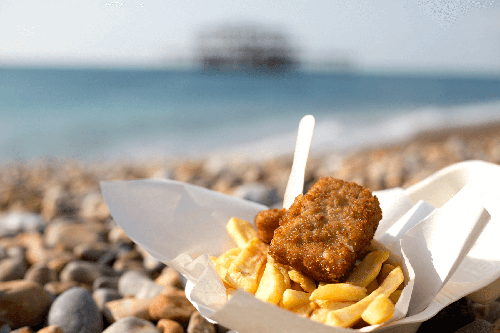 “Meat reducers and flexitarians can now enjoy the iconic traditional Fish and chips, with a clear conscience as they enjoy the UK’s first truly sustainable “fish” made entirely from plant-based ingredients,” the company said in a press release. “The contaminants in our oceans are finding their way into the food chain.  Through taste-obsessed development, the ‘Making Waves’ range proves some delicious, truly revolutionary alternatives to real fish, which look and taste the same, but without harming any fish, or our oceans, at all.”

VBites is the leading producer of vegan meat, fish, and dairy in the UK with over 100 products distributed across the UK, 18 European countries, and other select locations across the globe. It has been recognized as the UK’s most ethical food supplier ten times and is known for its commitment to using natural, non-GMO plant-based ingredients and no hydrogenated fats or artificial colors. Last year, the company announced that it would expand to Austria, Hungary, and Slovenia, likely due to increased demand for plant-based alternatives to traditional animal-based meat.