Leading plant-based milk brand, Good Karma Foods, has announced the launch of brand new ready-to-drink flax milk. The new products are nutritious with low sugar and packed with omega-3, vitamins a and d, calcium, and protein.

The new beverages will be available for purchase at supermarkets across the United States, as well as the online market giant, Amazon.

“Good Karma is the inspiration behind everything we do. Our new plant-based beverages were designed to offer the whole family highly-nutritious, low-sugar options they can conveniently enjoy on-the-go,” stated Doug Radi, the chief executive of Good Karma Foods. He added, “we’re thrilled the new line will allow us to expand into new channels, including the launch of our first-ever offering on Amazon, making it even easier for families across the U.S. to purchase Good Karma products.” 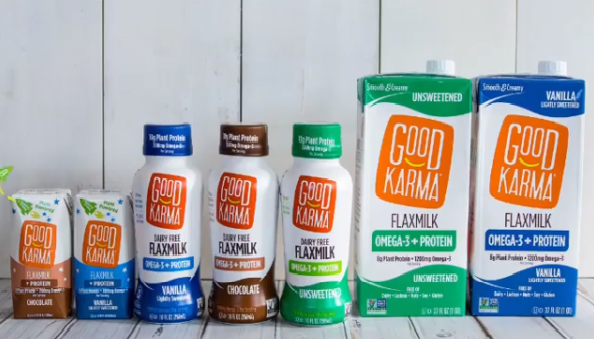 The Good Karma brand focuses on positivity and nourishment; the team believes that by being good to your insides, this will reflect outwardly, too. “Good Karma isn’t just our name, it’s the inspiration for everything we do,” the company said on its website. “The rippling effect of relatable and meaningful acts of goodness starts with small drops of positive energy that we aim to inspire – not only as a brand, but also as people with good hearts. It is time to sew the seeds of positivity in a world that has come to expect the opposite in everyday interactions.”

The plant-based milk market has accelerated over recent years, with a report released in January stating that dairy alternatives were set to exceed a value of $34 billion by 2024. Even American company Bolthouse Farms – who in the past have profited from dairy and continue to use animal products – have stated that plant-based milk is the future. The advertisement campaign championed the slogan: “what your kids will give their kids.”