The conference, called “A Future Beyond World Hunger and Other Crises,” will address some of the most pressing issues of the modern world such as world hunger, how to feed the growing global population, climate change, ecosystem degradation, overexploitation of natural resources, the global impact of meat consumption, and animal abuse.

Wollen will serve as the keynote speaker. The event will also feature an open forum between speakers and guests as they discuss solutions and strategies for overcoming both social and political resistance to change.

The event will be hosted by vice president of the European Parliament Intergroup Animal Welfare and Conservation, Stefan Eck. Several Parliament members who have dedicated their time to the various issues will join Eck in co-hosting the event: Eleonora Evi, Indrek Tarand, Jeppe Kofod, Georges Bach, and Elena Nalon from the Brussels-based animal welfare organization, Eurogroup for Animals. 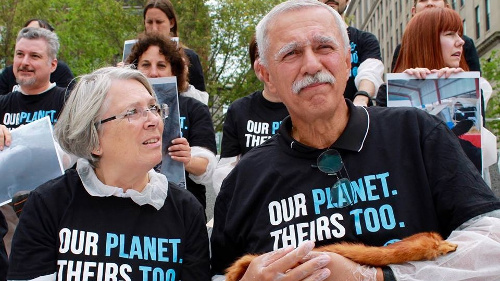 A respected member of the animal rights community, Wollen became an Honorary Fellow of Oxford Centre of Animal Ethics in 2012 and was awarded Vegan of the Year in 2014. Wollen now dedicates his time to being an ally to animals by speaking on their behalf at events across the globe.

Earlier this year, Wollen appeared in a video produced by the trust, where he named animal rights as one of the world’s biggest social justice issues. “In human history only 100 billion humans have ever lived, 7 billion are alive today and yet we torture and kill 2 billion sentient animals every week… It is time for every educated, enlightened, and responsible citizen to get off the meat and dairy drug,” he said.

This is not the first time that the European Parliament has taken a stand for animals. Six-hundred-twenty MEPs have voted in support to end global cosmetic animal testing. Further, the Intergroup Animal Welfare and Conservation works in conjunction with the government to ensure that animals are given the respect that they deserve by lawmakers.