Pioneering plant-based sushi chain, Beyond Sushi, is opening its sixth New York City location. The upcoming sushi shop will open its doors on April 23rd on Mulberry Street in SoHo.

“The wonderful neighbourhood vibe along with its tourist appeal makes SoHo a great destination for us,” explained co-founder Tali Vaknin in a press release. “We are bringing healthy, plant-based cuisine to the neighbourhood. Our goal is to serve the SoHo community the same high-quality, fresh vegan food that we have been providing since 2012. We tap into a whole new market of customers who have yet to try our creations.”

Beyond Sushi serves no animal products, giving the franchise a sustainable edge over most sushi shops. Founded by husband-and-wife duo, Guy and Tali Vaknin, “Beyond Sushi offers an assortment of distinctive sushi rolls and other nutritional staples.”

Renowned chef, Guy, and his team of culinary experts pair fruits and vegetables with whole grains, creating not only the classic sushi roll but other dishes such as dumplings, noodle soups or salads, rice bed salads, and summer rolls.

“Beyond Sushi strives to popularize a modern approach to traditional sushi by crafting intricate and wholesome dishes that are as pleasing to the eye as they are to the palate,” the franchise’s website states. “Our mission is to promote a sustainable, all-natural, and compassionate menu. Our promise is to refresh and nourish your bodies while creating a new standard of clean eating. Our vision is to create a world in which society will reduce their ecological footprint.” 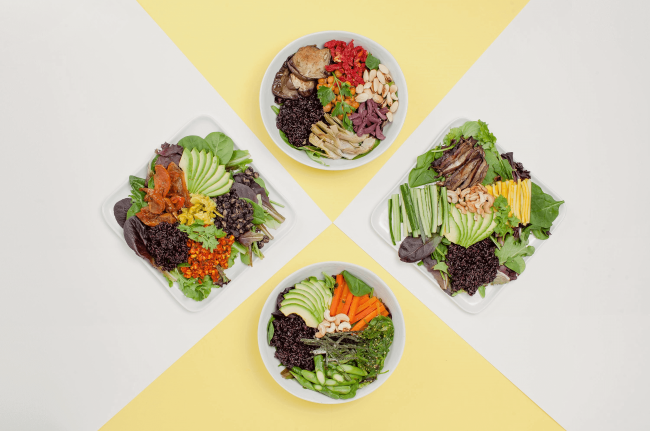 In the last three years alone, veganism in America has seen a huge increase, soaring by 600%, while both vegan and lab-grown seafood are on the upswing as well. New Wave Foods makes vegan shrimp, the first of its kind which is reportedly “uncompromising in taste.”

Additionally, late last month, clean meat company, Wild Type netted $3.5 million in funding in a bid to develop lab-grown salmon, and Ocean Hugger Foods has created “Ahimi” sushi, the world’s first commercial raw tuna fish alternative made from tomatoes. The success of the vegan tuna has the company ready to release vegan salmon and eel later this year. And Good Catch Foods, the highly anticipated vegan “seafood without sacrifice,” line, which was co-created by Wicked Healthy founders Derek and Chad Sarno, is expected to hit shelves in late 2018.