Londoners are getting a new vegan cafe. The nation’s first all-vegan French pâtisserie, Cafe Forty One, is expected to open its doors later this month.

“Forget what you thought about veganism and enjoy a decadent vanilla millefeuille, a luxury afternoon tea, Asian slaw or a Bourguignon pie and mash,” says the La Suite West Hotel, where the restaurant is located.“We take inspiration from multicultural London and love a twist on a good classic to show that there’s nothing to lose and everything to gain from veganism.”

According to the website, Café Forty One is a “crossroad between luxury dining and café style ambiance.”  The restaurant is helmed by Head Chef Clarisse Flon, who says she will be bringing a host of vegan breakfast buffet items, brunch, lunch, and the popular afternoon vegan tea service to the menu. Unique items such as citrus smoked vegan carrot salmon and pomegranate salad, French toast with creamy yogurt and roasted strawberries, and almond crème brûlée, will appeal to the hotel customers as well as locals seeking out the vegan offerings. 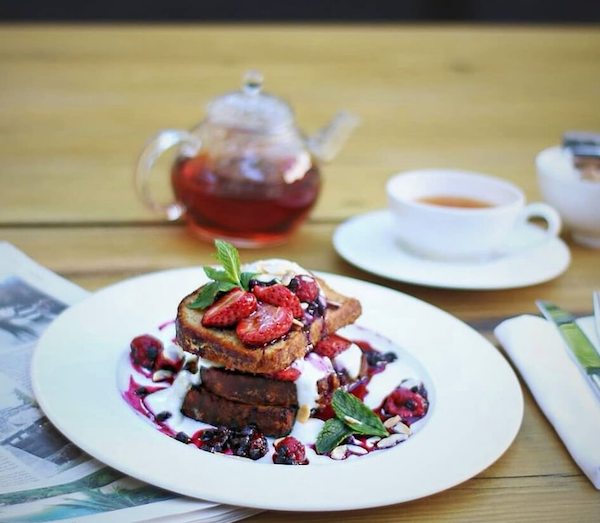 Traditional French baked goods rely heavily on butter, eggs, and cream, but a growing number of bakers are proving plant-based ingredients function just as well. Coconut oil has shown to be a popular substitute for butter, and aquafaba–the brine left over from cooked chickpeas–is the perfect egg white replacement for delicate meringues.

Earlier this year, London’s Artisan Bakery was recognized by the Evening Standard for the best vegan croissant in the city. Instead of butter, the bakery used grapeseed oil and shortening to attain flaky croissant perfection.

London has become a hotbed for vegan restaurants and bakeries as the overall interest in plant-based cuisine continues to rise. From fast causal concepts like Temple of Seitan to a vibrant array of street food and market pop-ups, the vegan scene is no longer niche in this city.