UK fast-food chain, Leon, is now operating in downtown Washington, D.C., with plans to expand in the near future.

According to Eater, Leon has set an ambitious goal for its new US branch. It has promised to follow this first location with up to 20 additional shops within the D.C. area, and the company is already negotiating a lease for its second Seventh Street location.

In the UK, Leon boasts 50 storefronts, all with an emphasis on fast, quality food and sustainability. Company CEO John Vincent told Eater, “We are definitely not fast-casual. It’s a fast-food model,” explaining that the full transaction time is typically completed in under three minutes. On the sustainability side, the restaurants attempt to incorporate natural light and use sustainable energy sources.

Although fast-food, Leon’s menu is a far cry from the standard lamp-lit french fries and pre-made burger patties associated with most carry-out concepts. The menu changes seasonally, and each iteration is approved by a nutritionist to create “gut-friendly” foods. It is also very sensitive to a wide array of dietary preferences. Online, one can click filters such as “I am vegan” or “I’m pregnant” or “I don’t eat wheat” to tailor the menu options to one’s lifestyle. 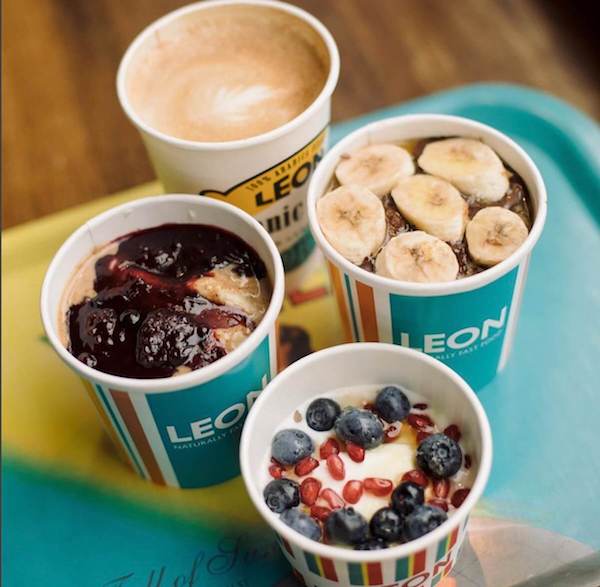 The vegan menu is extensive, offering options for breakfast, lunch, and dinner. Early bird items include various porridges topped with fruit and spices, and the “All Day” menu features falafel wraps, mezze salads, vegan meatballs, a vegan burger, and more. The restaurant also provides an assortment of vegan espresso beverages, teas, and desserts, including mini cupcakes, donuts, and a peanut butter and jelly brownie.

Health-conscious and vegan options are increasing in many fast-food and fast-casual chains as owners work to appeal to the mounting number of plant-based consumers. A simple green salad is no longer enough. In the US, non-vegan chains such as Hummus Republic, Burger Boss, and Sweet Fin Poke have all created menus that center around healthy eating and include vegan entrees, no substitutions required. Leon will soon join this growing list of vegan-friendly fast-food concepts.

The chain, well-known for its burgers, has announced the launch of a plant-heavy burger patty as part of its new menu. While still “fast” the new burgers, called the LOVe burger, has a focus on the link between gut and mental health and the benefits of a plant-based diet.

Whilst many burgers are indulgent and high-calorie the new offering focuses on nourishment to create a burger that is kinder to your body as well as being kind to the planet. It’s already available in the UK and will be arriving to the US by the end of the month.