Warburton’s, a major British bread company, recently conducted a survey to determine the UK’s favorite sandwich. The results were surprising. According to the research, the hummus and falafel sandwich reigned supreme, even over the meat-based options.

The bread company took a deep dive into the popularity of sandwiches in UK history, beginning in the 1970s. During that decade, ham salad took the top spot, though it later took a backseat to chicken salad in the 1980s. The favorite sandwich shifted toward the turn of the century with a nod to the BLT, and in the early 2000s, things got fishy with the popular smoked salmon and cream cheese.

Given this history, one would assume that the next in line would also be meat-based. However, palates have seemed to change in preference for plant-based options. Warburton’s survey included the opinions of 2,000 Britons, crowning the hummus and falafel sandwich as the most popular UK sandwich option of the 2010’s.

Darren Littler, the innovation director of Warburton’s, commented, “Whilst the humble sandwich has remained a classic UK favourite over the decades, it’s interesting to see the fillings that fall in and out of favour in line with trends and preferences.” He continued, “Now, with a vastly increased number of choices compared to years gone by, more adventurous fillings are now clearly the order of the day for many Brits, with corned beef no longer cutting the mustard.” 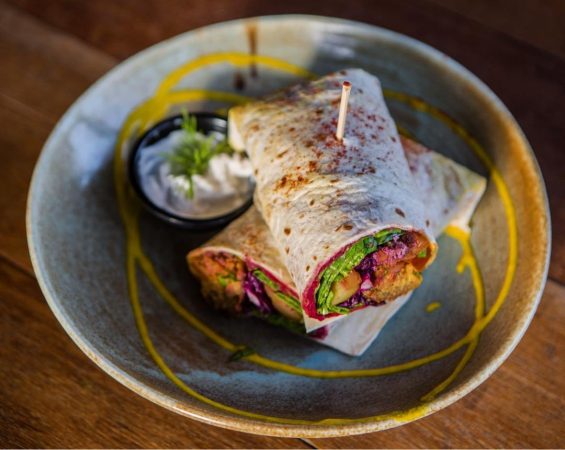 Rounding out the top-five in order of popularity is the hummus and falafel, barbecue pulled pork, avocado, chicken and avocado, and brie and grape.

The survey also revealed that Britons eat an average of four sandwiches a week, and over one-third of participants said sandwiches are one of their favorite meals.

Given the medley of vegan markets and even vegan vending machines in the U.K., it’s more convenient than ever to grab a satisfying plant-based sammie. Many mainstream grocers are also stocking up on vegan grab-and-go sandwiches, further expanding their “free from” lines to appeal to this new wave of conscious, health-focused consumers.

With 2020 not too far off, one can only wonder what the next most popular sandwich will be. Perhaps a throwback to the old school PB&J, or vegan coronation salad!