Actor Zac Efron is currently recovering from knee surgery. Whilst resting at home, the star has opted for some vegan ice cream to complement his “Game of Thrones” marathon.

Posting about his injury on Instagram, Efron wrote, “I tore my ACL shredding the gnar but all is good. I opted for surgery so I can come back stronger than ever.”

According to Teen Vogue, he later uploaded an image of himself to his Stories with his leg up at home, chilling with a scoop of dairy-free ice cream in front of the TV.

The actor’s ice cream of choice is from Pressed Juicery, a California-based juice chain which also serves frozen desserts, premium waters, and a variety of plant-based protein snacks. Its ice cream range Freeze was created to “fill a gap in the market for a clean, plant-based dessert that actually tastes good,” according to the chain’s website.

Flavors include Matcha, Vanilla, Chocolate, and Strawberry, and all are made with natural ingredients including dates, filtered water, and almonds. 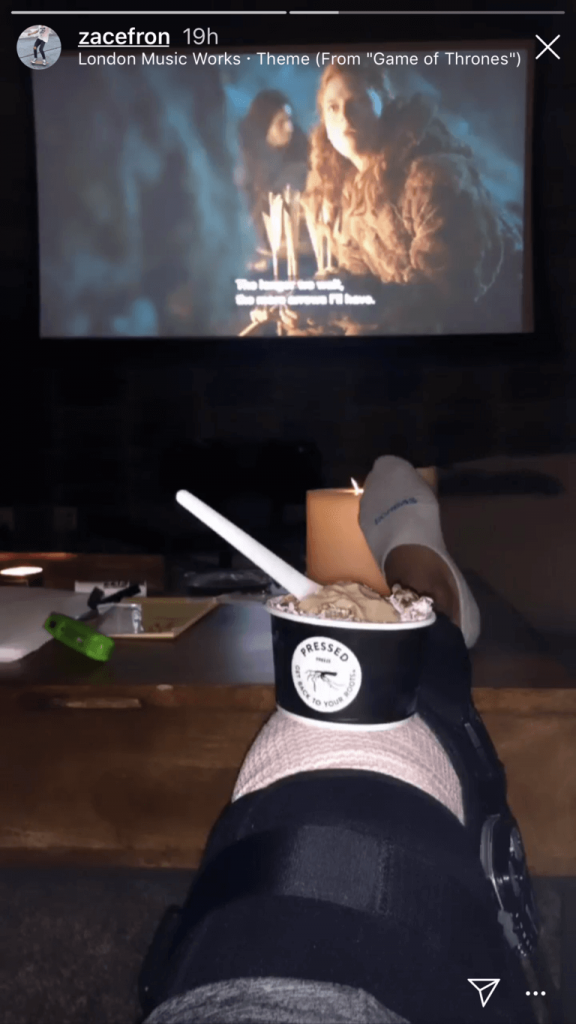 Efron’s choice of dairy-free ice cream is evidence he’s sticking with his decision to adopt a plant-based diet, which he made at the beginning of 2017.

The former “High School Musical” star initially opted to ditch animal products for his role as the killer Ted Bundy in the 2019 biopic “Extremely Wicked, Shockingly Evil and Vile.” According to the actor, he had to slim down fast to get into the right shape to play the part. “It was a rather large transformation and lifestyle change,” he recently told Variety.

However, the radical conversion to plant-based left him feeling “brilliant,” he told Teen Vogue during filming.

Whilst he initially made the decision to ditch animal products for his health and for his role, the actor also seems to have discovered a love for animals. He adopted a pit bull in April, saving them from euthanasia.

Back in the summer, he posted a picture of himself with his brother cuddling baby goats, and when wildfires wreaked havoc in California, he urged his 36.5 million Instagram followers to think of the farm animals.