The legendary plant-based burger from Impossible Foods is still in demand. In fact, the Impossible Burger is said to be coming out on top when sold alongside beef- “outselling conventional burgers from cows”.

According to Impossible Foods’ Chief Operating and Financial Officer David Lee, the Impossible Burger “is still selling out and a top menu item nearly everywhere it’s served”. Which is an impressive feat, considering more than 250 restaurants across America serve the vegan product, in at least 18 states.

At its launch “people literally stood in line to try it”, and it seems things have only improved since then. Delivery service Postmates has recently teamed up with the company, after customers kept “asking for the Impossible Burger by name”. Postmates believes the product is “taking the world by storm”, and as a company who are “committed to sustainability”, their values align with Impossible Foods. 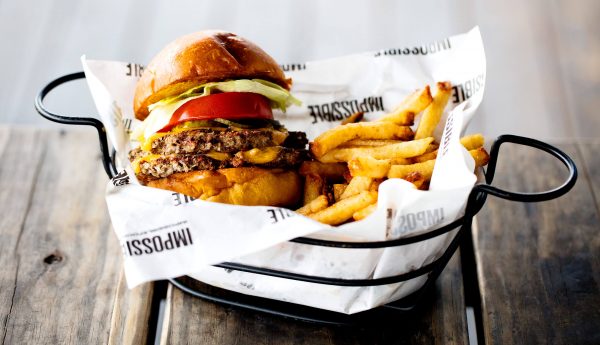 Compared to beef burgers, the Impossible Burger uses 95% less land, which is particularly promising as “almost half of the land area of Earth is being occupied by the animal farming industry, grazing, or feed crop production,”  Impossible Foods C.E.O Patrick Brown points out.

It also uses 74% less water and contributes 87% less greenhouse gas emissions to our environment. Their website names the burger a “carnivore’s dream”, due to its meaty appearance, texture, and taste. The best part? It uses “0% cows”.

Lee states the plant-based ‘beef’ burger is even helping to increase revenue in restaurants, while “surprising and delighting customers”.