JUST — formerly known as Hampton Creek — is making a big move. According to Foodnavigator-Asia, Josh Tetrick, CEO of the billion-dollar food startup, says the company will open a manufacturing facility in Asia later this year. This will be the company’s first facility outside of the United States.

Tetrick co-founded JUST with the aim to create plant-based alternatives to common animal products. “If we were starting the business from scratch,” Tetrick told Foodnavigator-Asia, “we’d probably start in Asia. If we look where the demand is likely to be, where food security is the biggest concern, and where cultural connection to our products could be the highest, then that could be Asia.”

He has set his sights on expansion, with plans to bring the Just products to Japan, China, and Singapore as soon as possible. Asia represents a big opportunity for JUST, as Asia, in his opinion, has a strong influence on food culture. It’s also relevant to note that many of the company’s biggest investors are in Asia. 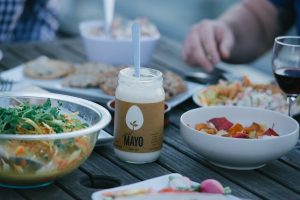 In addition to this, JUST is also planning to enter the clean-meat market. Clean-meat, also known as “cultured meat,” is grown in labs from a few animal cells — meaning no animals have to be bred, farmed, or slaughtered to maintain production. JUST has targeted the end of 2018 for bringing its clean meat to market. Others in the space include another Bay Area startup, Memphis Meat and several Israeli companies including SuperMeat, which just raised several million in funding.