A new study published in the journal Food Microbiology found that vegan kimchi has the same microbes as traditional kimchi, suggesting that those buying vegan kimchi are still able to reap the probiotic benefits.

Kimchi, a staple Korean side dish, is made from fermented vegetables. The basic process for making it involves combining a vegetable (typically napa cabbage or Korean radishes, though other vegetables are also used) with scallions, gochugaru (Korean chili powder), ginger, garlic, salt, and aekjeot, a fermented fish sauce that plays a role in growing gut-healthy bacteria.

“In vegan kimchi, producers swap in things like miso, which is a fermented soybean paste, in place of the seafood components,” explained Michelle Zabat, an undergraduate at Brown University and lead author of the study. “We wanted to know what the effects of making that swap might be in terms of the microbial community that’s produced during fermentation.” 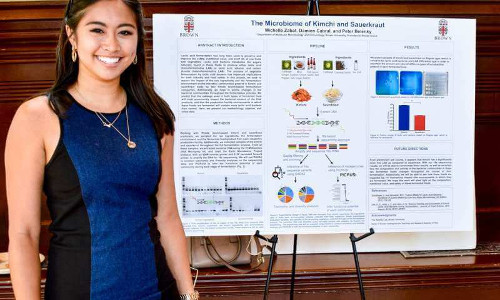 To analyze the differences, Zabat partnered with Chi Kitchen, a Rhode Island-based company that makes both traditional and vegan kimchi. Researchers took bacterial microbe samples from the starter ingredients, during the fermentation process, and from the final products. Environmental samples were collected from the factory production tables, sinks, and floors. Working in the lab of Peter Bentley, an assistant professor of molecular microbiology and immunology at Brown, researchers then used high-throughput DNA sequencing to identify the kimchi microbes present.

While the study revealed that each sample contained different microbial communities to start, throughout the fermentation process the communities became more similar. To the surprise of researchers, the study found that the end products are more or less the same, dominated by the bacteria Lactobacillus and Leuconostoc.

Researchers also learned that the dominant microbial community of both kimchi samples closely matched the community found in samples taken from the production facility. Given that the study analyzed only one brand of kimchi, it is not clear whether the bacteria found in the production facility came from the kimchi or the other way around. Researchers acknowledged that it is possible that the facility provided a starter culture that influenced the end product.

Regardless, with the rise in popularity of plant-based eating, consumers have more choice than ever before when it comes to vegan probiotic-rich food. Last year, a survey conducted by Packaged Facts revealed that more than a quarter of Millennials are interested in gut-healthy food. Fish-free kimchi, as well as kombucha, plant-based yogurt, and vegan kefir are all examples vegan fermented foods whose retail presence has grown in recent years.