An Australian student has created a sustainable vegan leather jacket made from kombucha. The cruelty-free jacket is the creation of 17-year-old Heather Weir, who created it for her higher secondary certificate fashion project. It earned her admission to the London College of Fashion. She’s the youngest Australian to be accepted into the program.

As reported by The Sydney Morning Herald, Weir created the material by following tips for making homemade kombucha. She combined green tea with sugar, water, apple cider vinegar, and SCOBY (symbiotic culture of bacteria and yeast), a slime-like “community” of bacteria that’s used to ferment kombucha. The tub was then covered with a clean blanket and left to ferment for 10 weeks.

“Let’s just say my parents were very supportive,” Weir said. “It does have a smell, a very strong vinegar scent, and it wafted over everything. But they said, ‘She’s got a vision, she wants to make it for a purpose’.”

After the 10-week period, Weir dried the fabric and created a vegan leather jacket and used the remainder to make a shopping bag. According to the student, the material is biodegradable, feels like a plastic leather, and can be cut and sewn like other fabric. 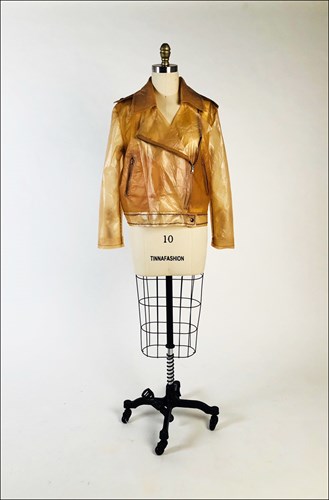 However, there is one drawback – it’s not weatherproof. “If it rained it would blow up to look like kombucha scoby again,” Weir said. She speculated that in the future, scientists may be able to genetically engineer the kombucha to be waterproof or to look a certain way.

Weir is not the only Aussie to experiment with vegan kombucha leather. In August 2016, design students at the Queensland University of Technology (QUT) researched the potential of SCOBY’s potential as a sustainable bio-textile. According to Dean Brough, senior fashion studio lecturer at QUT, the kombucha leather has strong commercial potential: “It’s versatile – it can be cut, stitched, moulded, glued, oiled, dyed, painted, waterproofed and laser-etched,” he said.

“The fact you can put it in a washing machine when it comes out shows how strong it is, you can get quite brittle kombucha when it is thin or have it at the thickness like leather of shoe where it is really strong,” he continued.

Kombucha leather is being made in the US as well, at Arizona State University’s School of Art. Bulgarian fashion designer Galina Mihaleva has set up an experimental vegan leather lab in a former teacher’s lounge, experimenting with different factors like leaving some tubs open, in order to see how it changes the end material. She hopes that eventually, her perfected method can be used as an alternative to the cruel and environmentally-hazardous leather industry, though she admits that she is a long way off.

In recent years, a number of other innovative, cruelty-free vegan leathers made from materials like pineapple, coconut water, and apple peels, have emerged.