Although this particular menu item is new, Whole Foods Williamsburg has already cemented a successful relationship with the small vegan business, serving a select variety of its most popular sandwiches, burgers, platters, and sides. The company makes all of its meats and cheeses in-house, and it’s not afraid to use them liberally. Other stand-out items at Whole Foods include the Oyster Mushroom Po’Boy, Truffle Fries, and the Return of the Mac, which features plant-based buffalo chicken, fried tofu, mac & cheese, lettuce, tomato, and ranch on a fluffy potato bun. 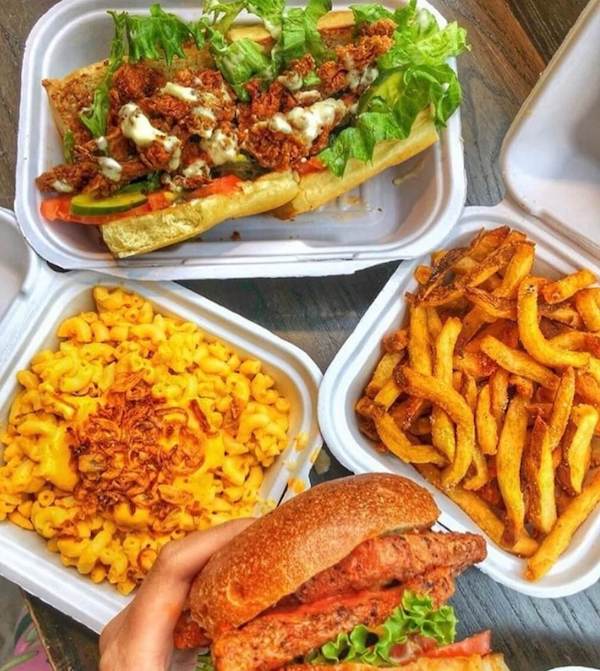 Outside of Williamsburg, the company hosts regular pop-up events throughout New York City and also runs a catering service with a wide selection of plant-based yet heavy offerings. It has also traveled to other parts of the country, wowing festival goers with its over-the-top, Instagram-worthy creations. In May, the company made its return to Eat Drink Vegan in Los Angeles, partnering with local restaurant, Seabirds Kitchen, to serve up a Hot Chk’N and Waffles Sandwich. The monstrosity combined Chickpea & Olive’s famous Nashville glazed Chk’N fried tofu with Seabirds’ vegan bacon Belgium waffles, generously drizzled with maple syrup. If one thing is certain, Chickpea & Olive is anything but boring.

Whole Foods has acted as a springboard for other vegan food brands as well. In the hot bar section, customers in select regions can find vegan Mac & Yease, NUMU mozzarella, and Chinese Beef & Broccoli made with Lika vegan meat. The grocer also launched plant-based sushi made with Ocean Hugger Foods Ahimi, a tomato-based tuna alternative. And of course, the supermarket’s shelves are lined with new vegan products on the daily, from Cado ice cream to Nush cream cheese.