Renowned vegan runner, Fiona Oakes, has achieved another world record. Oakes smashed 14 minutes off the Guinness World Record for running the fastest time for a half marathon in an animal costume.

To complete the achievement, Oakes ran in Norway’s Tromso Half Marathon. The former record was held at one hour and 46 minutes, but Oakes completed the event — whilst wearing a cow costume — in just one hour and 32 minutes.

“I have run in my cow outfit before and looked at doing a Guinness World Record for the fastest woman in an animal costume over 100km but this is not a recognised Guinness distance so they suggested the Half Marathon,” Oakes told Great Vegan Athletes. “I thought I would be sadly lacking in speed – especially in a cow costume – but decided to give it a try and hope that what I had – coupled with massive endurance – might see me through. Sadly I didn’t factor in 20 + mile an hour winds, rain and freezing cold!”

“The cow suit acted like a kite and some points and I feared being whisked off into the Arctic Ocean and ending up as Polar Bear breakfast!” Oakes continued. “Holding my ears and horns on was another challenge as was the weight of a wet, soggy, freezing cold cow suit clinging to you!” 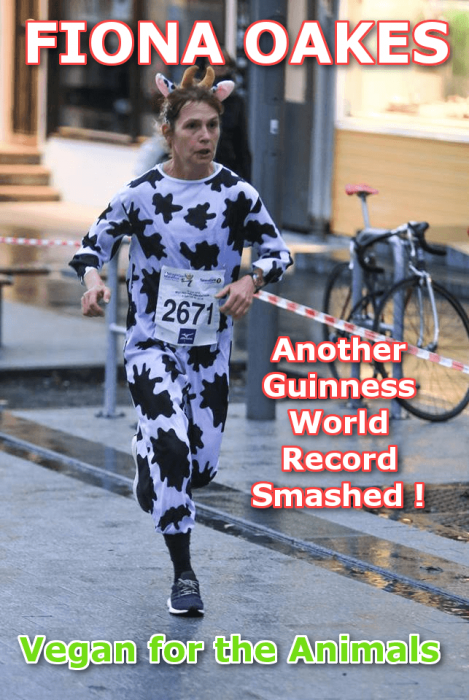 Oakes accredited her protein-packed plant-based diet for helping her power through, in addition to her passion for animal welfare. “[L]ike I always say, knowing the 70 billion reasons you are there and trying to give [animals] a voice to be heard, always makes you dig that bit deeper than the rest,” she said. “The suit did hamper me considerably and was very uncomfortable but not early as bad as so many animals – human and non-human – suffer every single minute of every single day of their horrendous existences gives you no room or reason to complain.”

Oakes founded and runs the Tow Hill Stables Animal Sanctuary in Essex and is also an on-call firefighter. The athlete’s latest Guinness World Record joins her growing repertoire of athletic achievements. She holds the records for the fastest times in the North and South Pole marathons and has beat out existing record marathon times on every continent on Earth. Earlier this year, she featured in part of a video series with The Vegan Society to discuss her endurance running, ethical veganism, and energy-packed lifestyle.