This Sunday, January 6 marks the official end of the Christmas season and the start of Carnival. It’s also when the Christian feast Epiphany, or Three Kings Day, which commemorates the day when the Three Wise Men are said to have visited newborn Jesus, is celebrated.

According to Mardi Gras New Orleans, the eight weeks leading up to the holiday, also known as Fat Tuesday, are a time to eat, drink, and be merry before Lent, when many will commit to giving up luxuries until Easter. It’s marked by parades, balls, feasts, and tradition, such as the famous Mardi Gras king cake.

A king cake, which represents the three wise men, consists of a simple braided dough decorated with gold, purple, and green sprinkles. The cake also usually includes a tiny plastic or porcelain baby (to represent baby Jesus) hidden inside. According to tradition, the person who finds the baby in their slice of cake has to host the next king cake party.

In recent years, many bakeries have updated the recipe to include cream cheese or fruit fillings and even vegan versions. For example, local news source NoLa reports that the plant-based bakery Breads on Oak is offering a vegan, organic king cake with a ghost and cayenne pepper-infused housemade cream cheese frosting. If you’re looking to celebrate with a vegan king cake this year, there are several bakeries that offer an animal-free version or you can even try baking your own. Here are five ways to celebrate Mardi Gras with a vegan king cake.

Today we will be on the Fox 8 News! Show us some love and give us some views! We’ll be talking about a special sweet treat! Our Vegan Organic King Cake you just can’t beat! I know it’s coming up soon, but check out Fox 8 at NOON! #local #nola #kingcake #foxnews #vegannola #freshbaked #organic #breadsonoak #uptown #bakery #mardigras #kingsday #hereitcomes #yay #yum #tasty #treats #sweets

Breads on Oak is a New Orleans-based organic vegan bakery and cafe that specializes in artisan bread and pastries. For Mardi Gras, it teamed up with the Louisiana Pepper Exchange to develop its plant-based VooDoo King Cake, consisting of dairy-free, ghost pepper-infused cream cheese frosting. The bakery will also offer a praline pecan king cake and a run and coconut cream king cake with a citrus glaze. All of the festive cakes are colored naturally with fruits and vegetables.

KING CAKE!!! ??? Were you lucky enough to grab a preview slice this morning? ? Starting Jan 15th, we will have King Cake slices in-store for you! Whole cakes may also be ordered at Krimseys.com (no shipping, sorry!) ⚜️ Happy Mardi Gras!!! ??? #soyfree #vegankingcake

Founded by a Louisiana native, North Hollywood-based Krimsey’s Cajun Kitchen says that it is the world’s first vegan Cajun restaurant. The menu offers plant-based versions of Southern classics like hush puppies, beignets, sweet potato and pecan pie, and po’boys. From January to February, you can order a vegan king cake made with all-natural food coloring. 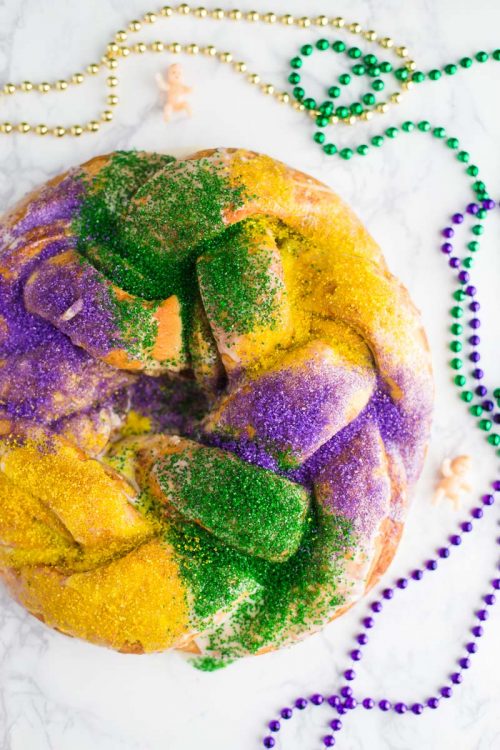 Can’t find a vegan king cake to order in your area? Try making your own for Mardi Gras! This simple recipe uses Bob’s Red Mill Egg Replacer instead of traditional eggs. As the blogger describes it, this cake is “basically a giant cinnamon roll” that is then braided, iced, then covered with green, yellow, and purple sprinkles – or, you can dye the icing yourself with natural food coloring. 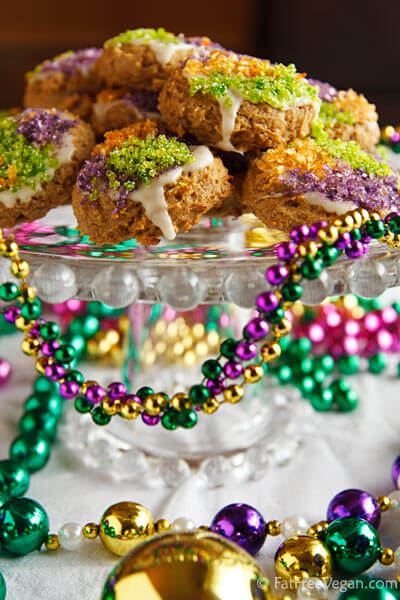 Gluten-free? Fear not! Try these gluten-free and vegan king cake cookies. Made from a blend of sorghum flour, Bob’s Red Mill Gluten-Free All-Purpose Flour blend, and tofu (don’t worry – you won’t taste it), these healthier cookies have a delightful cinnamon-pecan flavor. Not only are these free from gluten and animal-derived ingredients, they’re also oil-free!

We are 4 days away from King Cake season and we have created the most amazing filled flavors this year. All but one has local organic ingredients as we love to support our farmers. Check out our website and place an order for Friday! www.girlsgonevegannola.com #glutenfreevegankingcakes #vegankingcake #glutenfreekingcake

If baking isn’t your style, you can order a vegan, gluten-free, and nut-free king cake from NoLa-based bakery, Girls Gone Vegan. The bakery offers 10 varieties of king cake made without animal products, including traditional, salted caramel, pineapple upsidedown, blueberry lavender, savory, and no added sugar. Each cake is made from a blend of brown rice flour, oats, white rice flour, and tapioca flour and is colored naturally with turmeric, beets, and spirulina.