The meat-free category of major UK supermarket chain Sainsbury’s has witnessed rapid growth, with a 20 percent weekly increase in the sale of plant-based products.

James Hamilton, a meat-free and readymade meal buyer for the chain, recently revealed the news to UK food and drink industry media outlet Food Manufacture. He also noted that the grocer intends to meet increased demand by working to introduce new products.

“We’re always exploring new ways to offer even greater choice, quality, and value,” Hamilton said, highlighting the recent addition of vegan meats from Denmark-based food manufacturer Naturli’ Foods. The brand’s mushroom burger, which “bleeds” thanks to the addition of beets, recently made its market debut. By the end of the month, Sainsbury’s plans to introduce Naturli’ vegan mince in 400 stores. Like the vegan Beyond Burger in the U.S., which has outsold beef in the meat case at some supermarkets, both the burger patties and the mince will be marketed in the chiller aisle next to meat products.

“These are our most authentic meat products yet and, for this reason, we plan to stock them with [Sainsbury’s] mince and burgers,” Hamilton added. 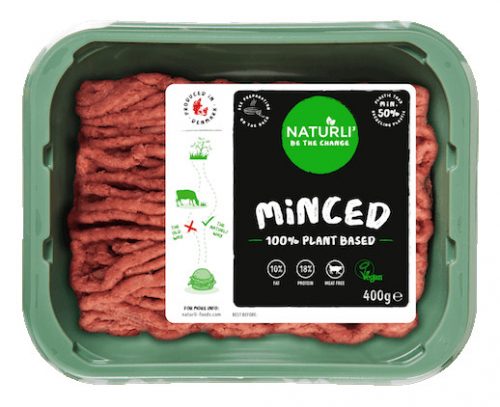 Naturli’ Foods CEO Henrik Lund expressed enthusiasm over the marketing strategy and credited the company’s rate of success to the realistic flavor and texture of its offerings.“We are experiencing overwhelming demand because this is indeed a food innovation. This is the first time consumers can buy a 100 percent plant-based mince that looks and tastes like minced beef, can replace minced beef in all recipes, and can be found in the cold counter next to traditional meat, “ he explained.

Sainsbury’s isn’t the only UK supermarket to see an increase in sales of plant-based products. In April, Bloomberg reported that Tesco, the country’s largest supermarket chain, has seen a surge in sales over the past year. The boost in revenue was credited to the launch of Wicked Kitchen, a range of vegan readymade meals. Following this success, Tesco later announced plans to expand the range with new lunch options. More recently, the supermarket giant added plant-based steaks from Netherlands-based vegan food company Vivera. Just days after the launch, the brand reported that it had sold nearly 40,000 vegan steaks in one week.