Vivera, producers of the popular vegan steak and other plant-based meat products, is taking on the quarter pounder. The new vegan “Veggie Quarter Pounder” burgers will be available in select Sainsbury’s beginning on October 6.

According to Food Ingredient First, Vivera is Europe’s fastest-growing vegan meat company. Its range is extensive – from plant-based fish to mince – but the brand made headlines in May after introducing its vegan steak at Tesco. The supermarket reported a sale of over 40,000 Vivera steaks within the first week of the launch. The product’s popularity continued well past this initial success, and now the company is working on increasing its output to 100,00 units a week to keep up with demand.

The new quarter pounder falls under the same food philosophy as the steak; it’s not for vegans, it’s for everyone. This is not the traditional grain and vegetable-based burger, but a thick, juicy, chewy piece of plant-based meat. Vivera posted a picture of the steaks on Instagram, captioning, “New! Our product development team went above and beyond into building the perfect, 100% plantbased Quarter Pounder.” True to its beef-based antecedent, the burgers come in a white tray wrapped in plastic and look like real meat, both in texture and its blood-red hue. 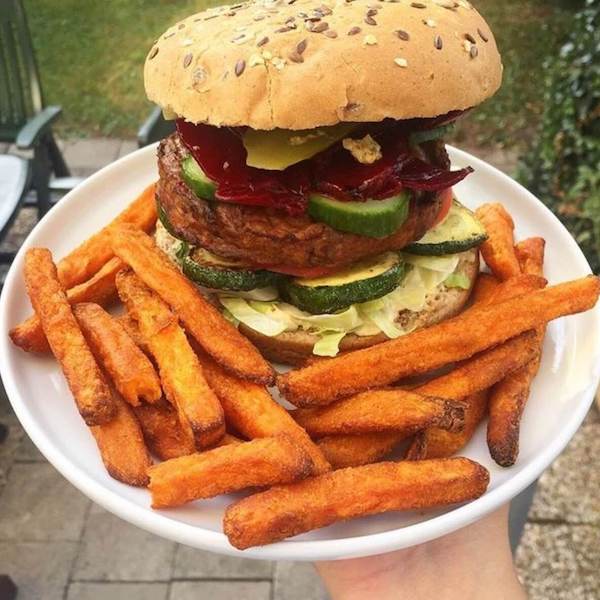 Unlike traditional animal-based quarter pounders, Vivera’s does not contain any cholesterol, nor does it harm an animal or make a significant impact on environmental resources. It also claims to be a quality source of fiber, which beef lacks. However, like meat, it is high in protein, iron, and even vitamin B12, the latter of which is extremely rare in pure plant-based foods.

Gert Jan Gombert, Commercial Director of Vivera, said in a press release, “We expect a large market potential for our Veggie Quarter Pounder due to its superior taste and structure. The smell, taste, and bite can hardly be distinguished from an Aberdeen Angus beef burger.”

Vegan meat alternatives have become a massive consumer market trend in recent years. According to data from Innova Market Insights, plant-based meat product launches spiked 58 percent from 2014 to 2015, and an increased an additional 35 percent from 2015 to 2016.

Gombert continued, “We are convinced that [the Veggie Quarter Pounder] will meet a significant need. For a growing group of consumers, the benefits of eating less meat are critical to a healthier lifestyle. Brittish retailers and consumers are at the forefront of adapting high-quality meat alternatives…Innovative and high-quality plant-based products can make a significant contribution to a more balanced diet toward more plant-based proteins.”