The unofficial (practically official) King of the vegan movement, musician, author, restaurateur, and activist, Moby, has announced the 2018 release of his 15th studio album, Everything Was Beautiful, And Nothing Hurt.

The new record comes after Moby’s two blatantly political albums, 2016’s These Systems are Failing and 2017’s More Fast Songs About the Apocalypse, both recorded with the Void Pacific Choir. 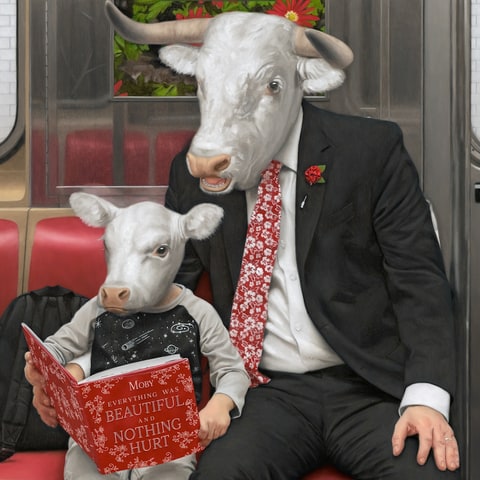 While the new record initially appears less overtly aimed at any one issue than the previous two releases, the title does indicate it may delve into some deep terrain as it comes from Kurt Vonnegut’s acclaimed 1969 novel, Slaughterhouse-Five, which unravels a tale about the unstoppable forces of war and fate. (The line Everything Was Beautiful, And Nothing Hurt is imagined by the protagonist as appearing on his tombstone.)

Moby, a vegan of 30 years, brings his love for animals front and center on the new record, literally. The album cover features artwork by Los Angeles artist Matthew Grabelsky — an image of a father cow reading a book to his baby cow — an obvious nod not just to Moby’s fellow activists, but to farm animals themselves who are naturally familial.

Everything Was Beautiful, And Nothing Hurt is set to hit stores on March 2.