Vegan mountaineer and photographer, Kuntal Joisher, has successfully climbed the world’s fourth-largest mountain Mt. Lhotse, part of the Everest massif, standing at 8,516 meters. He did it on a plant-based diet and only using vegan climbing gear. Joisher claims he is the first person to do so on an all-vegan expedition.

“IMO – no human has climbed an 8000m mountain using Vegan food, and gear. Yes there has been an ascent of Everest on [a] plant-based diet, but Down and leather was used,” he wrote on Twitter. “That changed [a] few days ago. I stood on top of Mt. Lhotse using 100% Vegan food and gear!”

The world’s largest animal rights organization, PETA, highlighted this in a congratulatory tweet. “He’s SO inspiring Mountaineer @kunsjoi climbed #MountLhotse (an 8000 meter expedition!) on a 100% #vegan diet in support of the animal rights cause. His #DownFree-insulated jacket by @Save_the_duck kept him warm & protected throughout the journey #PoweredByPlants,” the organization wrote.

This latest expedition is the mountaineer’s third 8,000-meter peak. He adds that he is the only known Gujarati in the world to reach the top of three 8,000m peaks (these are Mt. Everest MT. Manaslu and now Mt. Lhotse). 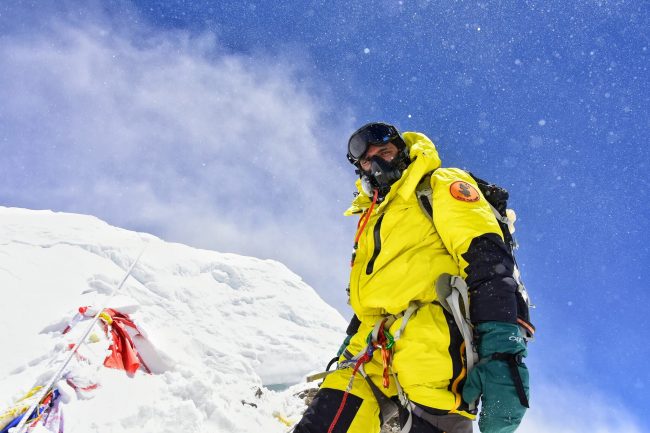 The mountaineer donned gear by sustainable fashion-focused brand, Save The Duck. The vegan company uses materials derived from plants to create winter gear with water-resistant qualities and breathability.

Joisher isn’t the only plant-based adventurer out there. Last month, a two-day all-female vegan climbing event took place in the Philippines, and last year an eighty-eight-year-old retired vegan physician who doubles as a climber scaled Mt. Kilimanjaro, one of the world’s tallest peaks. The physician, Fred Distilhorst, climbed the mountain to raise money for orphanages in Kenya that benefit children with AIDS.

Vegan athletes are taking the lead in a number of disciplines, proving the accomplishments can, at least in part, be owed to the increased health benefits of eating a plant-based diet. Recently, twenty-one-year-old vegan surfer, Tia Blanco, secured yet another victory at the Rip Curl Pro Tofino 2018 Championships.

To highlight these incredible vegan athletes, the documentary “The Game Changers” was created to break the stigmas surrounding plant-based protein and dispel the negative connotations by discussing vegan diets with plant-based pro athletes from across the globe.