Eid al-Adha is currently being celebrated by Muslims across the world. The festival, which is the second Eid festival of the year, is a celebration of Ibrahim’s devotion to God. In the Qu’ran it is said that Ibrahim was asked by God to sacrifice his only son, although Satan attempted to stop him from carrying out the task, he remained steadfast. At the last minute, Ibrahim was stopped from sacrificing his son, although this part of the story is told in several different ways.

Eid al-Adha is also known as ‘the feast of sacrifice’. During the festival, which lasts anywhere from 4 days to 2 weeks depending on where in the world you are celebrating, Muslims have large family meals and exchange gifts. It is also common for a goat or sheep to be slaughtered during this time and shared out amongst family, friends and those in need. 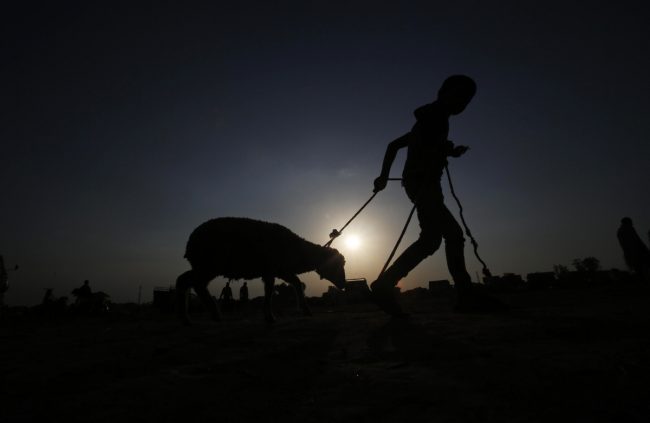 This year, vegan Muslims have been campaigning to end the tradition of animal slaughter during this time, and indulge in vegan or vegetarian foods at their family meals.

Sammer Hakim, co-founder of ‘The Vegan Muslim Initiative’ has spoken out about his issues with slaughter. ‘It’s not a necessary thing to do,’ claims Hakim, ‘killing so many animals…at a time when this very act is directly contributing to so many critical environmental issues is highly irresponsible.’

Within the Islamic community there is debate as to whether the slaughter of animals is obligatory or not. Some claim that the Prophet Muhammad was known for being kind to animals and hardly ever consumed meat.

Hakim believes that a focus on the present in the best approach when debating slaughter during Eid al-Adha: ‘We need to examine this practice in light of the realities on the ground today, we see mass producing and killing animals is the number one threat to our world today so it just makes very little sense to continue doing something that accelerates our own destruction on so many levels.’

The group already has over 800 members worldwide, mostly consisting of Muslims who are vegan or vegetarian. However, it has been met with some resistance.

Hakim believes that ‘[n]eedlessly killing animals isn’t the way forward,’ hoping that the group’s efforts can ‘bring back the true essence of taking care of this world we were trusted with and all that it contains.’

Despite some criticism, Hakim hopes his message will spread in Muslim communities across the globe.