Popular international plant-based milk brand Oatly has launched canned coffee with vegan milk in three different flavors. Its website lists the beverages under its international section, suggesting the new on-the-go drinks will be available across the globe.

“Out of nowhere, a pair of super-shiny cans tumbled into the Oatly lineup,” the company wrote on its website about the launch. Oatly, which many consider a leading brand in the plant-based marketplace, also shared on Instagram a light-hearted flow chart to encourage fans to try its Mocha Latte drink. “We made this new product and then we made this flowchart to help you figure out if this new product of ours is something that you might like to try,” Oatly playfully captioned. 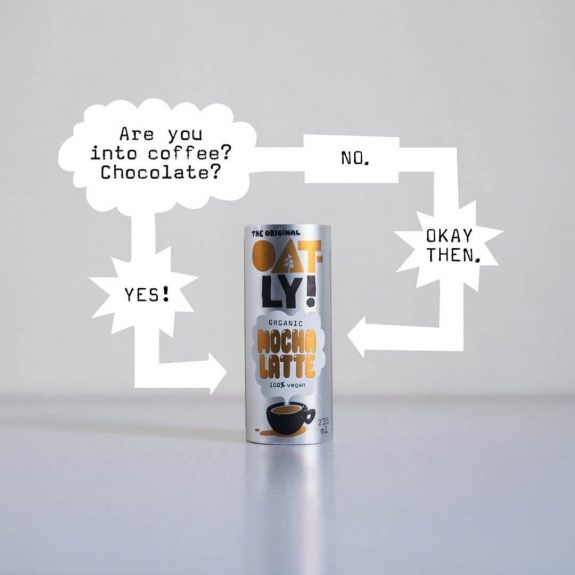 Oatly has made great strides in offering creative vegan goods to consumers across the world. In May, it discreetly opened its first vegan ice cream truck in Stockholm. To celebrate the launch, the company offered free scoops of plant-based ice cream to the public. The ice cream truck launch followed shortly after Oatly announced the launch of five new flavors of vegan ice cream.

Earlier this year, financial magazine Bloomberg reported that Oatly’s oat milk had gained an overwhelmingly positive reputation and had elicited a great response from its customer base. In fact, Oatly revealed that the demand for its products was so high that the brand was forced to increase manufacturing in an attempt to cater to the now-mainstream oat milk craze.

Oatly’s products are all entirely vegan, catering well for the growing population of consumers opting to buy more or wholly plant-based products. Data found that a third of Brits aim to eschew cow’s milk this year while half of Americans now consume vegan dairy-style foods.