(Updated May 12, 2019.) A new vegan bacon chip is about to hit market shelves. Pig Out bacon chips by Outstanding Foods are said to be “so bacon-like that even meat lovers struggle to distinguish the real thing,” according to Food Navigator-USA. The plant-based pork rinds are expected to launch in June.

Outstanding Foods is a plant-based startup company on a mission to bring vegan food mainstream. CEO and serial entrepreneur Bill Glaser decided to start with bacon, given the recent hype around the pork product in restaurant and food-driven social circles. Glaser determined that a chip was the most accessible vehicle to introduce vegan meat to the marketplace. “We wanted something really mass market, so we decided to start with snacks. Everyone eats chips.”

Glaser partnered with former Beyond Meat chef and Hampton Creek (JUST) co-founder, Dave Anderson, to create a line of plant-based bacon products that would appeal to the omnivore palate. The chef hit the mark by using a specific variety of mushrooms and seasonings to replicate the taste and texture of bacon.

“You get the savory, the umami, the saltiness, the sweetness, and the crunch,” said Anderson of his Pig Out bacon chips. 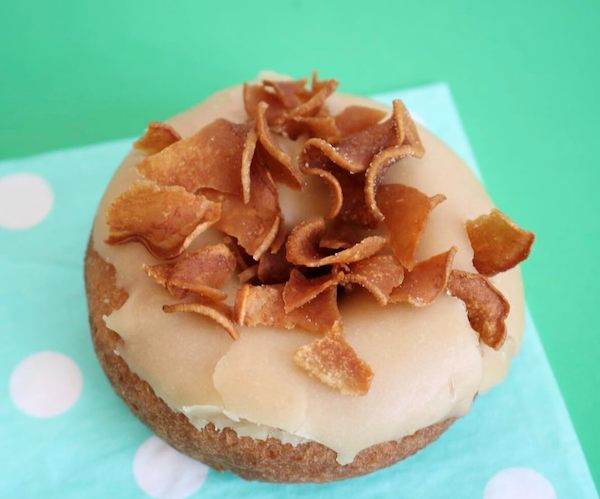 Although the brand is targeting the mass market, they are particularly focused on millennial consumers. “We wanted to be a Millennial-oriented brand that attracts attention on shelf, that’s playful and fun and cool, inclusive and attractive,” explained Glaser.

Outstanding Foods has already attracted $1.5 million in investments, much of which comes from “fun and cool” individuals. Former professional skateboarder and actor, Rob Dyrdek, actress Emily Deschanel, and actress/singer Daniella Monet have all lent their financial support. Further, Glaser promised to reveal additional ‘A-list’ investors soon. The brand is also working with high-level social media influencers to market the snack.

Pig Out bacon chips are on target to launch first through the Outstanding Foods website in June, then Thrive Market, followed by independent retail stores including Sprouts markets nationwide. “We hope that chains such as Whole Foods will come on shortly thereafter,” said Glaser. In the long run, the company looks to expand its plant-based product line to include bacon strips, jerky, bacon bits, and a bacon cheese product.