The handcrafted pizza chain has four locations – one in Portland, two in Vancouver, and one in Toronto – but its name has reached international recognition for its phenomenal pies. Tourists visiting these cities return to their hometowns gushing about the pizza, and it has also created buzz by vending at various vegfests throughout the country, such as Eat Drink Vegan in Los Angeles. Although Los Angelenos have their fair share of vegan slices, the line for Virtuous Pie stretches for a solid 30 to forty-five minutes at these events.

Although many have asked for the business to expand, it is conscious of maintaining a quality product, intelligently growing without overreaching. This may be why the company has decided to only sell a limited amount of its vegan cheese Friday through Sunday at one location. The first two cheeses available for sale are the tofu-based feta and the lemon-herb chèvre, though the cashew mozzarella is expected to be available soon. 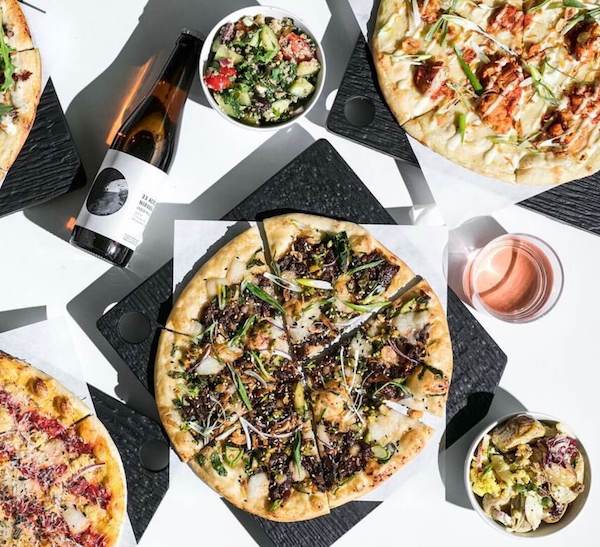 Jim Vesal, Virtuous Pie’s Director of Culinary and Business Development, discussed the vegan cheeses with Scout Magazine. “They aren’t meant to be copies of dairy cheeses,” he said, “they’re delicious stand-alone products in a category all to themselves.” Beyond putting the cheese on pizza, Vesal suggested incorporating them onto a cheese board or tossing with salads or pastas. “You can use them in pretty much anything you’d use dairy cheese for,” he commented.

In addition to its unique and cheesy pizzas, the restaurant is also known for its plant-based ice cream. Customers can grab a scoop, flight, or float when they dine in, but pints are also available to go. Flavors include Peanut Butter + Cookie Dough, Coffee + Donut, Honeycomb + Caramel Swirl, Cashew Chocolate, and more. Pints have been available since the shop opened in 2016, but it took two years to launch the sale of vegan cheese.

“Our customers have been asking us to sell our cheeses since we opened. So we’re pretty excited to be able to make this happen,” said Lia Loukas, Director of Marketing and Business Development.

The restaurant hinted that the cheese may become available for sale at its other locations, but no further information has been released.