Netherlands national pizza chain, New York Pizza, is offering two brand new vegan pizzas to its customers. One euro from each pizza sale will be donated to the Sea Shepherd Conservation Society.

Sea Shepherd Vegan Veggie and Sea Shepherd Vegan Shawarma Pizza are the two new vegan options available. Where the latter includes vegan meat, a creamy vegan garlic swirl, along with vegan cheese and red onion, the former, for those who like to keep things simple, consists of vegan cheese, cherry tomatoes, and arugula.

Whilst the company already offers 4 vegetarian options to consumers, the Sea Shepherd vegan pizzas are the first vegan choices on the menu.

Sea Shepherd is an international non-profit organisation, first established in the 1970’s. Its mission is to “end the destruction of habitat and slaughter of wildlife in the world’s oceans in order to conserve and protect ecosystems and species.” 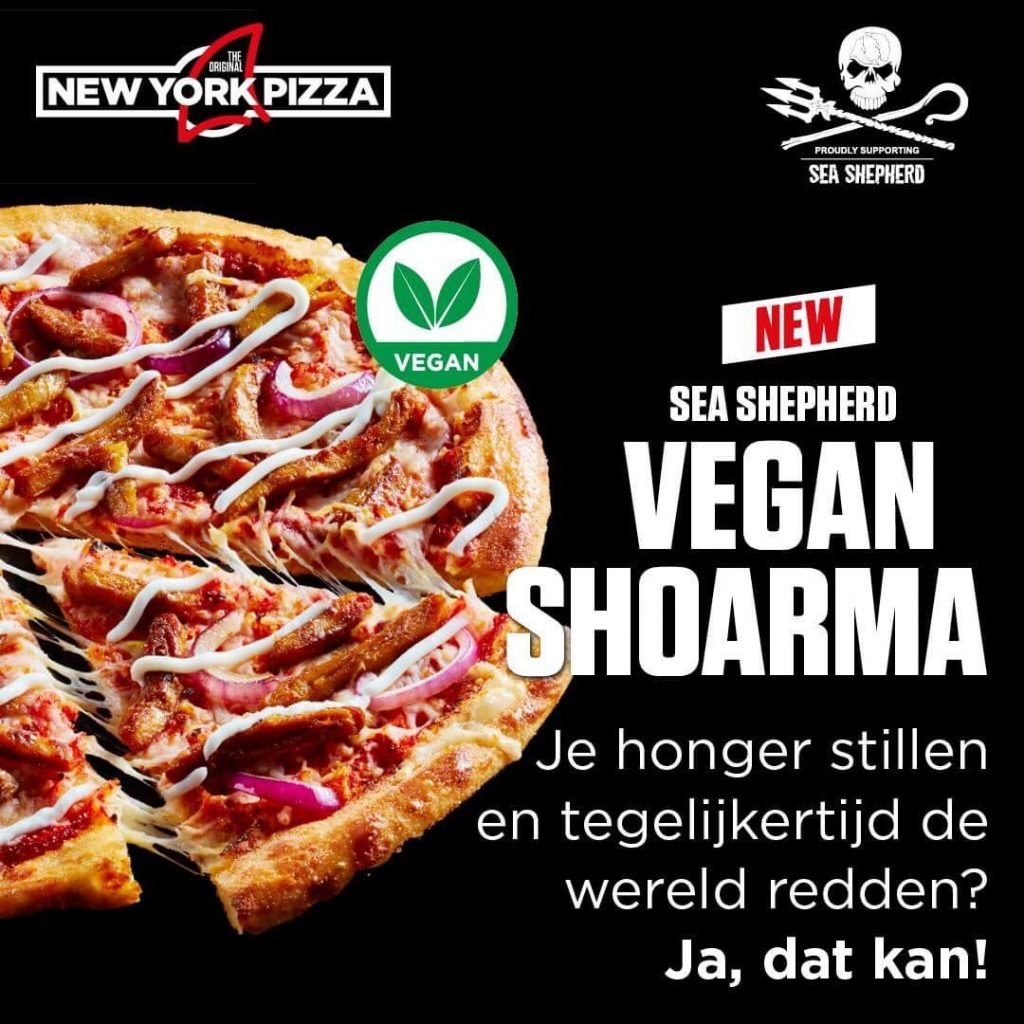 Preventing endangered vaquita porpoise from getting tangled up in the nets of illegal poachers in the Gulf of Mexico is just one example of how Sea Shepherd is working to protect the world’s marine life. Operation Clean Waves is another example – the organisation is working with the local community on Fanning Island, in the Pacific, to help them with waste management and to deal with the levels of plastic washing up on their shores.

It’s not just the community of Fanning Island who needs to be aware of plastic pollution, however, it’s the entire world. Earlier in April, Sea Shepherd launched a new, primarily social media driven, campaign in conjunction with FF New York named “Plastic Ocean” – the idea is to capture the global attention of millennials and generation Z in particular and inspire them to make a difference. The campaign features 3 visuals, as well as a video, which at first appear colourful, appealing, and dreamlike – however they actually portray sea animals trapped in plastic waste.

“Plastics are invading the oceans on an unprecedented scale,” CEO of Sea Shepherd, Alex Cornelissen, said in a statement. He added, “We can turn the tides, we can stop this invasion. What we have caused, we now have to fix.”