New global plant based product launches grew 63% from 2011 to 2015, said Kara Nielsen, manager of sales and engagement USA at Innova Market Insights. According to HealthFocus International, in the U.S alone from 2012 to 2016, plant-based product claims grew at a Compound Annual Growth Rate (CAGR) of 35.8%, with 220 related product launches in 2016 and 320 in 2015.

An interesting article in Fortune looks at why vegan products are on the up but the use of ‘vegan’ on labelling is decreasing. Instead there is increasing demand for plant based products as people become more health conscious, and as FoodDIVE assert it seems “that people want to eat more fruits and vegetables, but they don’t want to knowingly do so at the expense of meat and dairy”. 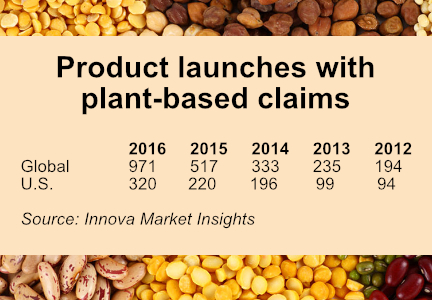 More and more consumers are opting for meat alternatives, with research by Mintel finding that 31% occasionally like to have meat-free days. But health reasons are also driving interest, with 30% saying they are watching their cholesterol and 29% claiming they are worried about eating too much saturated fat.

A 2016 study by HealthFocus International showed that only 13% of respondents considered themselves vegetarians and 1% identified as vegan, yet 17% of Americans said they were eating a plant-based diet either exclusively or predominantly and another 60% said they were cutting back on meat-based products. So plant based demand continues to grow and food companies are marketing their products to suit our demands.

Many brands are focusing on plant based labelling and products such as Beyond Meat, which has created“juicy” burgers from plant protein and has lobbied long and hard to get its products removed from the alternative or meat substitute section of the supermarket to the meat counter. Similarly, Hampton Creek who has created the “Just Mayo” egg less mayonnaise had to fight federal regulators to be able to use that label and is now in talks with leading meat firms about licensing their lab-meat technology.

Others are still preferring to appeal directly to vegan consumers, such as Vegenaise, another egg less mayonnaise produced by Follow Your Heart. The business, now a global brand, generated $50 million in sales last year and its flagship product, Vegenaise, is now sold in 23 countries.

Whether vegan or plant based, demand is increasing and with the growing supply of meat, dairy and egg alternatives consumers have greater choice when it comes to diet.