A vegan reggae festival will debut this October in Los Angeles’s Woodley Park.

Called the LA Reggae Vegan Fest, the event promises an “historic celebration” like no other, featuring world-renowned reggae artists such as Sister Carol, Macka B, Glen Washington, and Bushman, among others.

Guests of the LA vegan festival can also expect plenty of plant-based eats from a lineup of vendors who will serve only vegan food. According to the event: “One Love includes all animals, and so the menu doesn’t include any!” 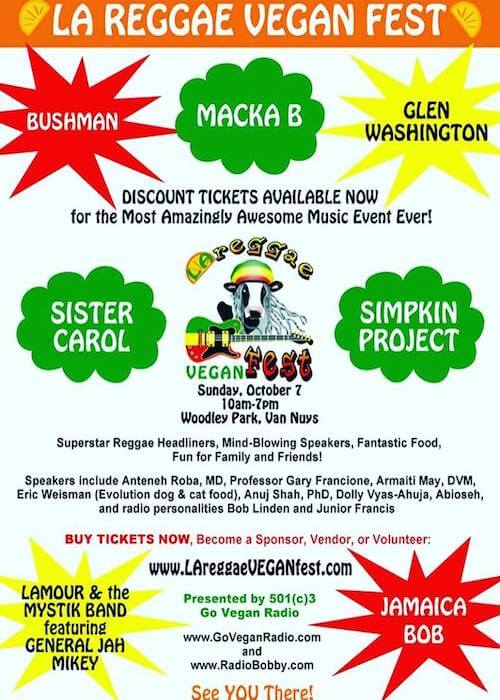 While LA Reggae Vegan Fest won’t kick off until October, it is not the only festival where Black vegan activists and artists will take center stage. Black VegFest, will take place in August in the historically Black Brooklyn neighborhood of Bed-Stuy.

Event organizers will ensure that the festival will provide vegan food, music, and thought leadership that addresses the socio-economic and political issues within the Black and Latino communities. The event’s mission statement reads: “Our ‘Black’ in Black VegFest is purposeful, but not a different kind of veganism. It’s an extension of community activism for black and poor and oppressed peoples everywhere.”

Both LA Reggae Vegan Fest and Black VegFest are representative of the growing power of the Black vegan community. In response to the overwhelmingly white representation of vegans in the media and within organizations, Black vegan activist Aph Ko launched Black Vegans Rock, a website created to uplift vegan people of color. After writing a list of list of 100 Black Vegans, Aph Ko received emails from Black vegan activists and organizations all over the world, which inspired her to launch the site.