Vegan singer Mýa has created the first-ever ASMR using only vegan food. An ASMR (autonomous sensory meridian response) audio track relaxes people through the use of sounds; it is meant to inspire a tingling feeling in the listener, and lead them into a state of meditation.

The ASMR, created with Fuse TV, starts with a satisfying pop of a baby-carrot bag, and Mýa commentating, in a whisper, that she does not know if the carrot was sliced to this size or “if a baby carrot was birthed by a big carrot or what.” She then crunches the carrots between her teeth.

The video reveals seven minutes and thirty-three seconds of plant-based crunches and whispers. But it isn’t all chewing and crunching.

The sound of a knife slicing an apple on a chopping board is also included in the video as another form of relaxing sound, along with a trickling sound as Mýa juices a grapefruit.

The singer has been vegan for three years, and appears to know her stuff on plant-based healthy eating. This latest endeavor by the Grammy Award-winning-artist includes advice on how to cook and eat the range of foods used in the ASMR.

For example, she suggests eating baby carrots alongside apples, celery, lemon, and lime, a combination which she promises is “so so so good” and will even “activate your sacral chakra,” a reference to the seat of the spine where, according to yogic philosophy, energy is stored. 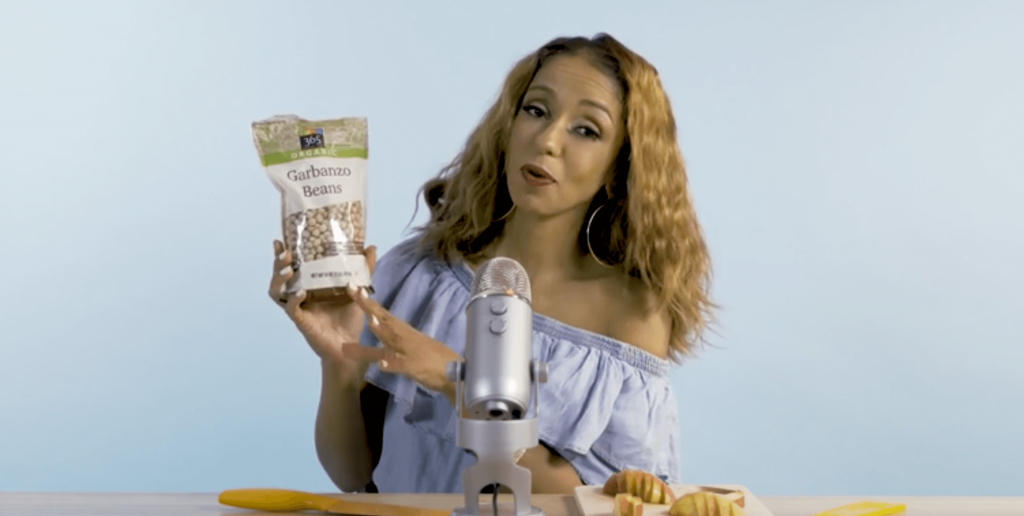 Likewise, she informs the listener that garbanzo beans can be eaten raw, once soaked, noting that they work well roasted or in soups. She even advises trying them blended up in a protein drink, saying, “Lots of protein here. Lots of carbs, energy. Fiber. All that good stuff. And iron. Chickpeas.”

Mýa even alludes to her improved health since being vegan, noting that the “probably unwashed” celery sticks will be no issue for her immune system which can “take any kind of salmonella that might be going around.” In support of this, she raves, “Apples are so amazing. They definitely keep the doctor away. One a day.”

Summarising the gist of the ASMR, Mýa looks into the camera with a mouthful of celery and says: “Vegan life. Get into it.”