There seems to be a quality vegan alternative to every meat product, these days, save one: traditional Dutch smoked sausage. However, the Netherlands-based meat alternative company, The Vegetarian Butcher, has just debuted the world’s first vegan smoked sausage, promising a product with a “bang.”

But these vegan sausages aren’t intended solely for the vegan population. The company is targeting meat eaters and flexitarians who may want to eat less meat due to health or sustainability motivations, but have yet to be convinced by the flavor or textures of the current vegan meat alternatives market. The Vegetarian Butchers know it’s catering to a tough crowd quick to criticize, so the company held its new product to the highest standards of taste and texture prior to launch.

Jaap Korteweg, founder of The Vegetarian Butcher, told Food Ingredient First, “The fact that we, together with sausage makers and flavor specialists, worked on this product for seven years, shows how much importance we attach to developing a great smoked sausage from all aspects. This was the longest development trajectory in our entire product range.” 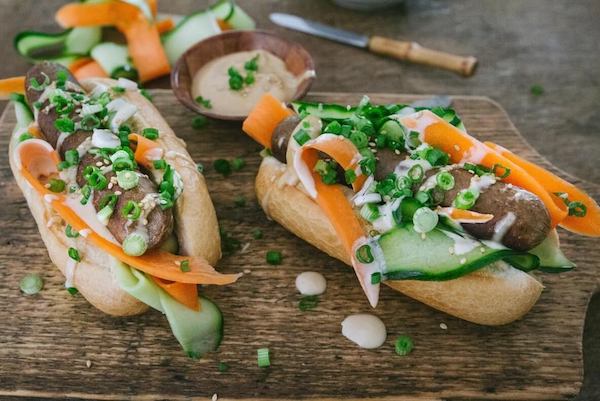 The company currently offers a wide range of traditional Dutch and more universal vegan meat products. From basic NoChicken Chunks and NoMince to NoSpeck and Croquettes, The Vegetarian Butcher makes a vegan (or vegetarian) version to satisfy nearly any meaty craving.

The Vegetarian Butcher is intentional with its products, ensuring the highest quality possible. Korteweg has received several awards for his businesses, including Entrepreneur of the Year (twice) in the Dutch newspaper, Trouw. The vegetarian meatballs also won the Bronze Ball in a meatball competition held by De Telegraaf, the country’s bestselling newspaper. Forty-four out of the 45 entries were meat-based. However, like a few other products, The Vegetarian Butcher’s meatballs are not vegan, as they contain egg.

The plant-based meat market is skyrocketing, according to current market and sales projections. Allied Market Research claims that the global industry for meat substitutes was valued at $4,175 million in 2017, and it is expected to reach $7,549 million by 2025. Europe, the U.S., and Australia all lead the global demand for vegan meat and dairy but other markets including India and Hogn Kong are growing rapidly.