So much vegan sour cream, so little time. We break down the best brands for dairy-free sour cream substitutes.

Sour cream is beloved by many, making the perfect topping for nachos, burritos, baked potatoes, soups, and stews. It can be used in baking to make cheesecakes, brownies, and sponge cakes.

And as more research points to the negative impact of dairy on our bodies, the planet, and the cows used to produce it, many are looking for cruelty-free ways to enjoy the diverse, creamy dip.

Why These Vegan Sour Cream Dips Are Superior to Dairy

Long have parents, schools, and television ads insisted that a glass of milk each day equals strong and healthy bones. However, a growing number of experts are dissecting this idea and finding that cow’s milk and other forms of dairy can actually harm our bodies.

Six-time cancer surviving professor Jane Plant, a geochemist who specializes in environmental carcinogens, believes that dairy can cause cancer. Plant developed a program that encourages people to take control of their health by adjusting their diet to include less animal products and more plant-based foods.

Vegan athlete Seba Johnson, the first-ever Black female skier to compete at the Olympics, believes ditching dairy can improve athletic performance. “In school textbooks we are brainwashed into thinking cows and other animals are here for us to drink from and eat,” she said in an interview with LIVEKINDLY. “More often now I see athletes perform their very BEST once they’ve cut dairy from their consumption. Once they get rid of dairy they are able to breathe, sleep, and recover faster!”

Dairy is known for its high saturated fat and cholesterol levels and according to experts, ditching it could lower one’s risk of conditions like asthma, arthritis, osteoporosis, and type 1 diabetes. Trading dairy for vegan alternatives could also improve acne and digestion. 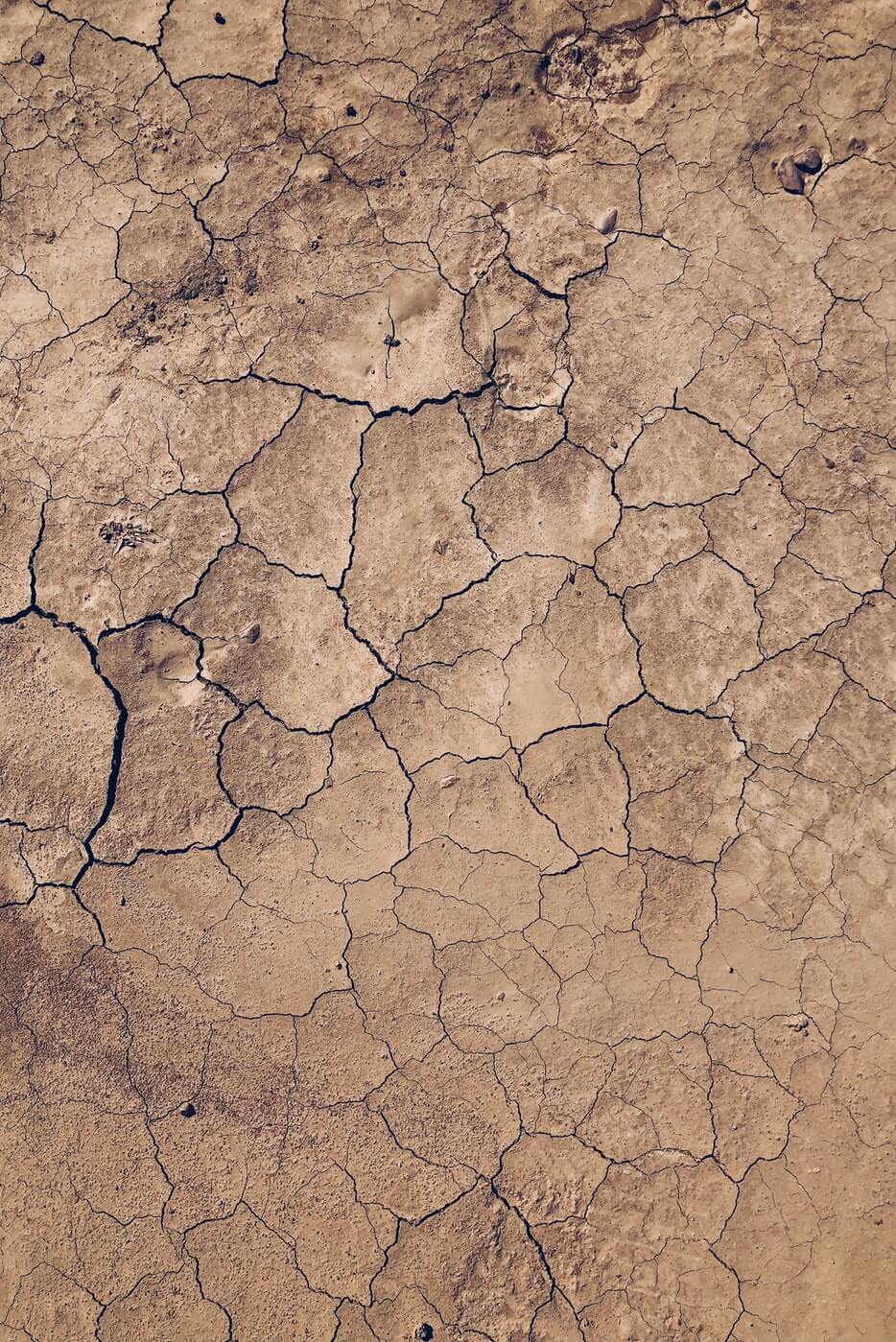 Dairy could be harming more than just our bodies. The World Wildlife Fund (WWF) highlights that dairy production adds “growing pressure” to the planet’s natural resources like freshwater and soil. Dairy cows and their manure generate greenhouse gas emissions which worsen climate change. “And unsustainable dairy farming and feed production can lead to the loss of ecologically important areas, such as prairies, wetlands, and forests,” WWF writes online.

Late last year, Ireland’s Environmental Protection Agency (EPA) released a report that highlighted the impact of the dairy industry on the planet.

Director of the EPA’s office of Environmental Sustainability, Eimear Cotter, said that the dairy industry posed “very significant risks” to the country’s goal of decarbonization. The report stated that “households, business, farmers, and communities” must come together to address the issue.

Should the public shift away from dairy and other animal products, the world could benefit from up to 50 percent less agriculture emissions before 2050, according to research.

Other research looked at the damage food production has on the planet including land and water use, air and water pollution, and carbon emissions. The study, conducted by Oxford researchers, found that going vegan is “the single biggest way to reduce your impact on planet Earth.” 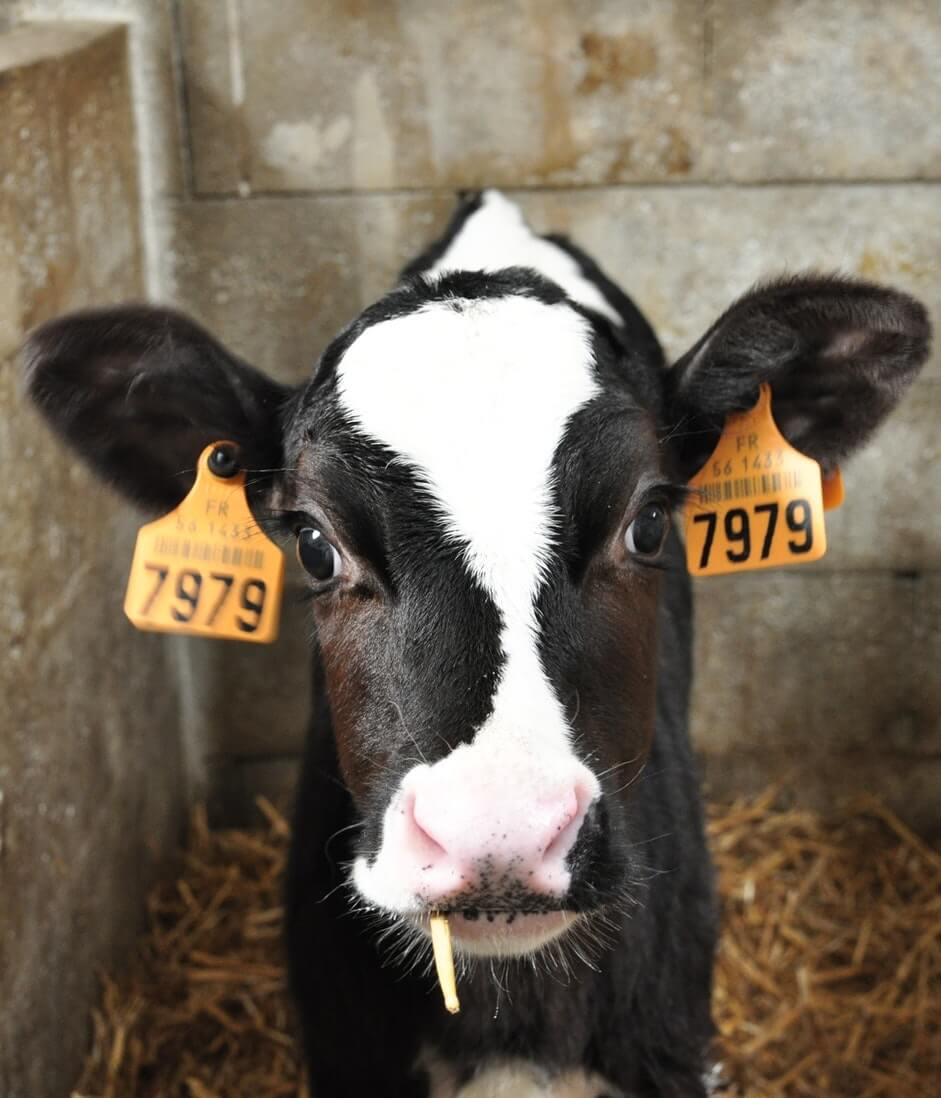 Sour cream tubs painted with smiling cows in open green paddocks will have you believe that dairy is kind to animals. Unlike the meat industry, it doesn’t require the slaughter of animals and the dairy used in sour cream came from a cow that needed – and probably enjoyed – milking, right?

For cows to produce milk, they must be in lactation. Typically, cows are artificially inseminated to become pregnant so that the milk can be collected for human consumption. Compassion in World Farming (CIWF) writes that dairy cows must give birth to one calf a year to keep producing milk. Cows are normally impregnated within three months of giving birth. “These high-production cows produce milk on average for less than three years, after which they are culled and their meat used for beef,” CIWF says. The organization also points out that most dairy cows – especially those in large-scale farming operations – don’t have access to pasture and are kept in sheds.

Mother cows are separated from their calves within 24 hours of birth, according to Australian animal welfare group, the RSPCA. Since calves are a byproduct of the dairy industry, they are usually sent for slaughter to become veal.

The separation of mother and baby results in “extreme stress” for both animals, PETA writes. “Mother cows can be heard calling for their calves for days,” the animal rights organization says.

A growing number of people are choosing to go dairy-free over animal welfare concerns. It was the top reason that 79,000 meat eaters signed up for Veganuary last year and a driving factor for the nearly 30 percent of young Brits that are ditching dairy and the 48 percent of Americans that are buying vegan milk.

Dairy-free milk, plant-based cheese, vegan butter, and even non-dairy whipped cream are appearing in the shopping carts of people around the world. But what about sour cream? 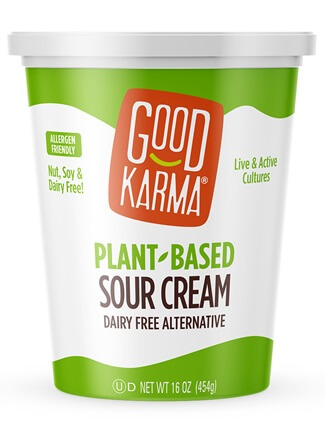 The brand works to create good in the world. “Good Karma isn’t just our name, it’s the inspiration for everything we do,” it writes on its website. “The rippling effect of relatable and meaningful acts of goodness starts with small drops of positive energy that we aim to inspire — not only as a brand, but also as people with good hearts.”

Good Karma’s sour cream will be available in the United States in spring.

Made with coconut cream, this dairy-free dip is thick, creamy, and “just like the old-fashioned favorite,” according to Follow Your Heart.

Beginning as a sandwich and soup counter, the international food leader’s passion for vegan food expands much further than sour cream; Follow Your Heart also makes plant-based eggs, mayonnaise, and dressings as part of its mission to “make the world more compassionate (and delicious).” 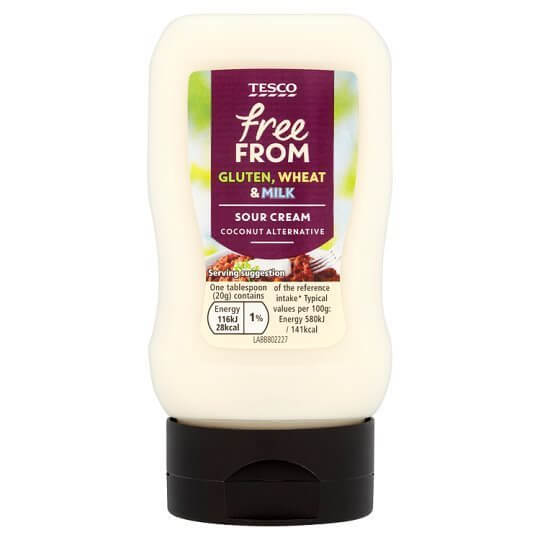 The UK’s biggest supermarket chain has its very own vegan sour cream product. Coconut, lemon juice, and plant-based oil, among other ingredients, make up the dip, which compared to Tesco’s British Soured Cream, offers a lower impact on health. Per 100 grams, the dairy sour cream contains 11.4 grams of saturates. The vegan version contains just 3.3 grams, as well as less sugar, fat, and calories. The Free From sour cream also offers more fiber and no cholesterol.

WayFare’s “refreshing, delicious” vegan sour cream is sure to win over dairy-lovers, according to the brand. “When it comes to food, we don’t like compromise!” the company writes online. Its sour cream is made with butter beans, organic oats, and coconut and safflower oil.

The WayFare team, a family whose roots are in dairy farming, “set out to meet the needs of our family, and ended up searching beyond ourselves – Way beyond,” the brand says. Now they are “blessing the world” with their vegan chocolate pudding, dairy-free jalapeño cheese, and “sweet cinammony” whipped vegan butter.

6. Dairy Free Down Under

Last year, Australian vegan brand Dairy Free Down Under, that makes plant-based cheddar, aioli, parmesan, and cashew cream, announced it was expanding its line. Its newly released vegan sour cream, made with soy, was “highly requested,” according to the company.