A vegan version of square sausage, a Scottish breakfast classic, is now available in Morrisons stores and select Aldi Special Buys across Scotland.

The Vegetarian Square Sausage is the product of Simon Howie, The Scottish Butcher, whose brand specializes in various cuts of meat, but also some vegetarian products, including meat-free haggis. “Whilst The Scottish Butcher may not be the first place you think of for delicious meat-free alternatives we are proud of our growing vegetarian range,” notes the company.

According to the brand, the new square sausage was launched in response to the rising trend for flexitarianism across Scotland. To date, there is no other product like it, notes Howie. “Lorne, square, slice, flat… whatever you prefer to call it, Scotland’s square sausage is almost a national dish in itself,” he said in a statement. “[Until now] there has been no meat-free alternative available and we are extremely excited to be addressing that.” 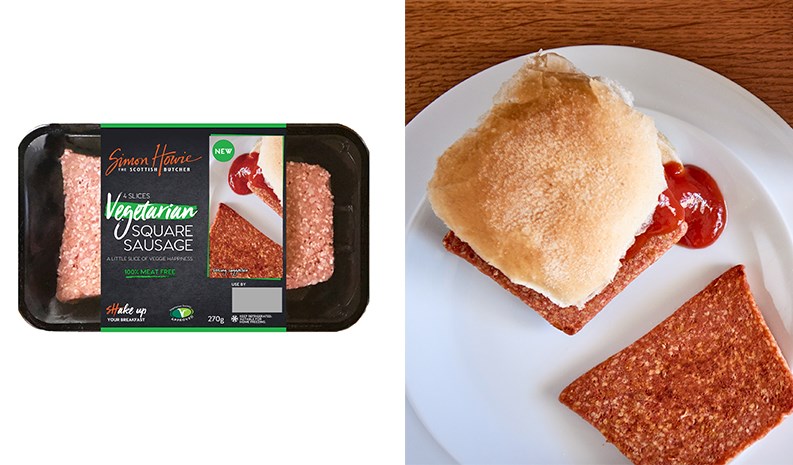 He continued, “Perfect for a meat-free morning roll, no one has to miss out on enjoying this Scottish classic anymore. Whether you’re vegetarian, or simply looking for a meat-free alternative, we hope our customers enjoy this new breakfast sausage.”

According to the butcher, the existing vegetarian products are performing well; in the last year, the sales of the Wee Veggie Haggis and Vegetarian Haggis have risen 24 percent. The latter represents one-fifth of the meat version, notes the brand, and this increases to one third around the time of Burns Night in January.

This year, some supermarkets across the UK reported an increase in the sale of meat-free Scottish food around Burns Night. According to a report released in February, Waitrose saw sales of vegan-friendly haggis rise by 36 percent.

Burns Night is a celebration of the life of the 18th-century Scottish poet Robert Burns, on which, traditionally, haggis and other meaty Scottish dishes are consumed. To tie in with the celebration, the new Vegetarian Square Sausage will be available from Scottish Sainsbury’s supermarkets in January 2019.

The new Vegetarian Square Sausage is being sold for £1.89 in Aldi stores and for £2.11 at Morrisons.