Getting hugged by a seven-foot mouse is really only half the fun at Disney World. This weekend, St. Patrick’s Day gets a vegan makeover at the theme park as Erin McKenna’s Bakery NYC (formerly Babycakes), will have a fully green range of vegan and gluten-free treats.

The vegan bakery has been located in The Landing at Disney Springs at Walt Disney World Resort since 2010 after a former McDonald’s location was offered to McKenna to bring her vegan treats to make the Happiest Place on Earth a bit sweeter.

“Here’s the scoop,” she told her followers in a blog post back in 2010, “a couple years ago I was approached by famed restauranteur  [sic] Larry Levy of Spiaggia fame (among many, many many others) to partner with him on a project to bring healthier food to Disney. McDonalds was given the boot and BabyCakes was in, along with his other restaurants Pollo Campero and Fresh Apeel. After much planning, building, fussing and fixing we got this guy opened last Friday night.” 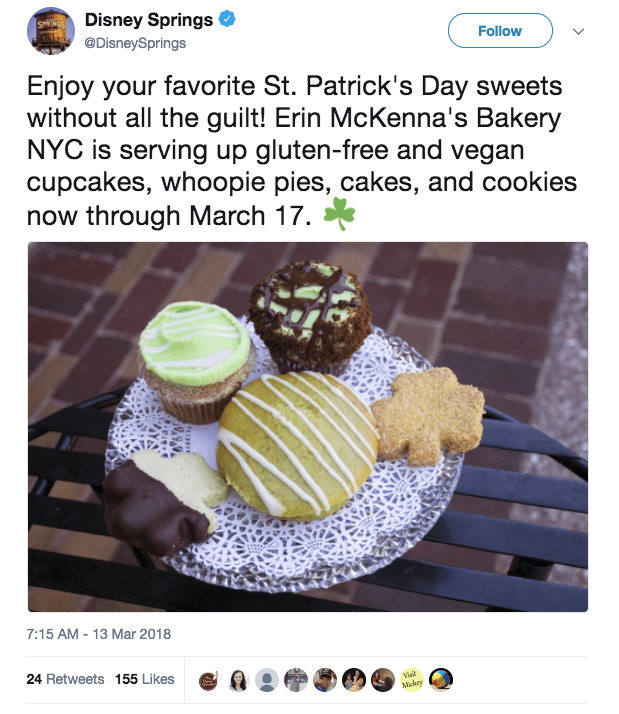 The vegan and gluten-free bakery has become nearly as iconic as the rest of Disney, with crowds piling in for McKenna’s signature vegan treats just as they would to wait for a ride or a photo opp with a princess.

In addition to the obligatory green cupcakes (made with all-natural food coloring), the bakery will feature vegan cakes, cookies, and even St. Patrick’s Day themed whoopie pies to celebrate the occasion.

Vegan desserts of all color are on trend to be one of the hottest food categories of 2018, with frozen vegan desserts leading the way as major conventional brands have all begun offering nondairy options to rave reviews.

Can’t make it to the bakery for dessert? Erin McKenna’s Bakery also offers delivery to most table service dining locations within the Disney area. Customers should call at least a week ahead to make arrangements. The chain also has locations in Los Angeles and New York and ships most items nationwide.