In case you didn’t know, vegan strawberry Starburst chewing gum is a thing.

Manufactured by The Wrigley Company, a subsidiary of Mars, Incorporated, Starburst has been keeping tastebuds satisfied since 1960.

Its box-shaped, fruit-flavored soft candy – including its chewing gum – is vegan in the UK although in the US, animal-based gelatin is used as an ingredient.

The chewing gum, which is sugar-free, “bridges the gap” between gum and candy, Mars Chocolate and Wrigley UK said in a statement.

Alyona Fedorchenko, marketing director at Mars Chocolate and Wrigley UK, added, “Research tells us there is a huge opportunity to grow gum penetration by introducing a ‘candy-like experience’, and that Starburst is the brand to lead this with.”

“Already over indexing with 15-24-year olds, Starburst is an established brand which resonates with consumers and we hope this new innovation will successfully deliver the sugar free confectionery solution that UK shoppers desire,” Fedorchenko said. 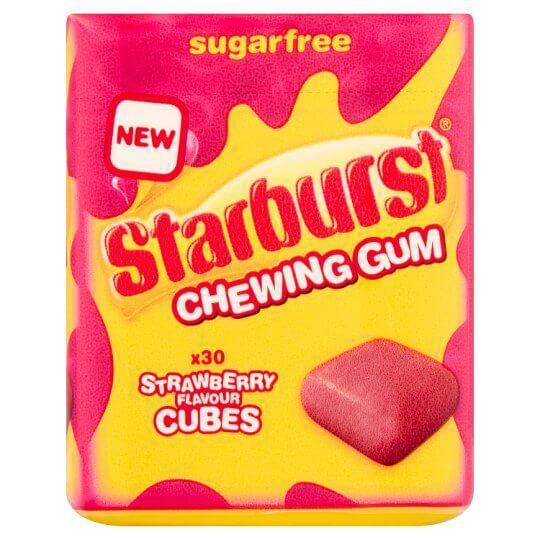 Some, but not all, chewing gum is animal-free. Gelatin – made by boiling animal skin, tendons, cartilage, ligaments, or bones – is sometimes used as a binding agent in gum production.

Stearic acid, commonly used as a thickening agent, and glycerin also appear on ingredients lists, although there are vegan versions of both.

Research from early last year found that “three out of 10 (28%) German consumers would like to see a wider variety of clearly labelled [sic] vegetarian and vegan confectionery, with this number rising to 46% of consumers aged 25 to 34.”

The same report found that vegan candy launches have increased by 140 percent since 2013.

Recognizing a gap in the market for gelatin-free pick ‘n’ mix, the Conscious Candy Company produces kilogram boxes of vegan sweets so that “you don’t have to worry about reading labels and can spend more time eating delicious candy.”

Teenage entrepreneur Alina Morse makes vegan lollipops that are better for you, containing no sugar, artificial dyes, and using natural food colorings from plant-based sources like turmeric and beets.

Starburst’s chewing gum line includes Red Berry Sticks and Fruity Mixes. They can be purchased online and at Tesco.