Vegan actor Violett Beane, best known for her role as Jesse Quick in the CW television series “The Flash,” is starring in a new video to promote animal empathy and the vegan lifestyle.

The video is an exclusive feature for PETA’s youth division, peta2, which is launching a new campaign, “All Animals Have Parts.” Beane states “[W]hether it be your family dog or cat or a chicken or a pig or human beings, we all have the exact same parts. We all deserve the same amount of respect.”

”[W]e stopped drinking our mother’s milk when we were really young. Why are we drinking someone else’s?” questions Beane. She continues by offering simple tips on how to enjoy vegan versions of dairy products, such as coconut yogurt and cashew-based vegan cheese sauce on nachos.

It’s not only the ethical side of veganism that resonates with Beane; she also ensures viewers that their health can improve by adopting a vegan diet. Personally, her energy levels have soared since going plant-based.“When I go to the gym, I have more energy to work out. I feel so much better physically,” said Beane.

In addition to the interview-style video, Beane also participated in a photoshoot for the campaign. The posters feature Beane with butcher cuts along her body, shedding fresh light on meat production and providing a visual representation of the similarities, albeit simplified, between human and animal anatomy. 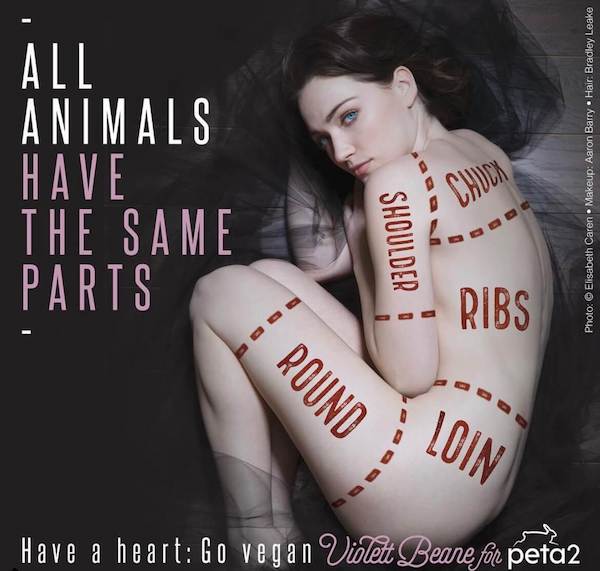 Beane joins the many A-list celebrities who have teamed up with PETA in campaigns to promote veganism and end animal cruelty. During February’s New York Fashion Week, PETA erected a thought-provoking billboard nearby the event. The advertisement featured vegan actor and Golden-Globe winner Joaquin Phoenix, who was pictured wearing a vegan wool suit. The billboard said, “Cruelty Doesn’t Suit Me. Wool hurts. Wear Vegan”. Alicia Silverstone has also lent her support in the fight against wool. She was featured in her own PETA-sponsored billboard saying she’d rather go naked than wear wool. Pamela Anderson, Kristen Ritter, James Cromwell, and Moby are among the dozens of other celebrities who have participated in PETA campaigns to save animals.