Rich Roll, a vegan ultra-endurance athlete and author, took the former “Jackass” star Steve-O on the ride of his life. The two vegans both live in Los Angeles, so when Steve-O made the announcement that he’s working to get in shape, Roll took him up on the offer.

In an Instagram post today, Roll shared a photo of himself with Steve-O out in the mountains of Malibu, taking a break from their trail ride. Roll captioned, “He said he’s trying to get into the best shape of his life so I gave him a tour of the neighborhood.” Both are smiling, which shows Roll either took it easy on the celebrity, or the ride has just begun. However, unlike his “Jackass” days, Steve-O definitely seems to know what he is doing. He’s sporting a pair of biking shorts, has a proper helmet (though he’s not wearing it), and even has clips (shoes that clip into the pedals, generally only used by experienced riders). Roll is also rocking bright blue clips, tight black biking spanx, and an eye-popping green helmet (plus some serious calf muscles).

Roll first made a name for himself in athletics through his success in triathlon racing. He was a top finisher in the 2008 and 2009 Ultraman World Championships, which many view as one of the toughest endurance races on earth. He’s also completed five Ironmans over five Hawaiian islands in under a week. Beyond that, he has multiple marathons and endurance challenges under his belt. Steve-O, though not quite as seasoned an athlete, is working to attain optimum fitness, and part of that is following a vegan diet. 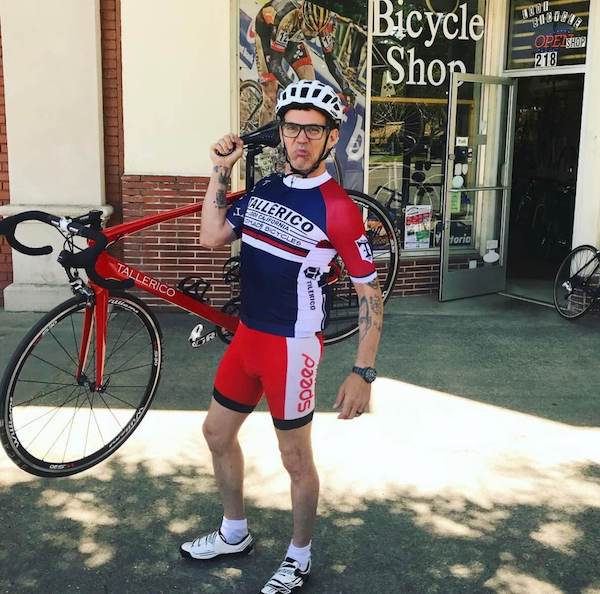 For Steve-O’s birthday in June, the star wrote on Instagram, “For my birthday this year, I decided to get in the best shape I’ve ever been in. I may be old, but I’m healthy as f*ck! #HappyBdayToMe.” The post featured a shirtless Steve-O with his dog, Wendy, proudly flexing his bulging biceps. A vegan since 2013, his diet is certainly helping him achieve this goal. Of course, a little training from Roll could accelerate his athletic performance, pushing him past the limits of what he thought possible.

Roll has made a career out of inspiring others and driving them to reach their “best, most authentic selves,” via his best-selling memoir, “Finding Ultra,” and his weekly podcast, “The Rich Roll Podcast.” He interviews the game-changing minds across all industries, from business, spirituality, activism, and fitness, motivating his listeners to go beyond their self-enforced limits and accomplish the extraordinary. As a former guest, Steve-O shared his gripping personal story, from “Jackass” to vegan.