The ultramarathon took place over the course of three days at Pathfinder Ranch, a wildlife preserve situated in California’s San Jacinto mountains, just south of Palm Springs. Participating runners repeatedly traversed a two-mile trail loop over 72 hours. According to the website, the Beyond Limits Ultra is considered “one of the most unique ultra events in the southwest.”

Following the race, Corbett tweeted about her victory. She placed first among female runners, fourth among all runners, and broke a personal record, running an additional eighteen miles more than her previous record. “I had a plan and I executed very well,” she wrote.

“This year my plan was to win 1st Female in the 72-hour race and beat my previous 72-hour record which was 174 miles,” the vegan runner told Great Vegan Athletes, declaring that “If you’re not having fun you’re doing it all wrong!” Having fun is clearly an essential part of this endurance challenge, at least for Corbett. In every photo, she can be seen decked out in brightly colored, punk-inspired outfits, flashing a smile.

To keep herself fueled during the grueling ultramarathon, Corbett said that she had plenty of vegan running snacks on hand: “I used Unived products – they are vegan – and Muir energy gels. I used pickle juice for the salt, boiled potatoes, chips, and Bearded Brother Bars.” 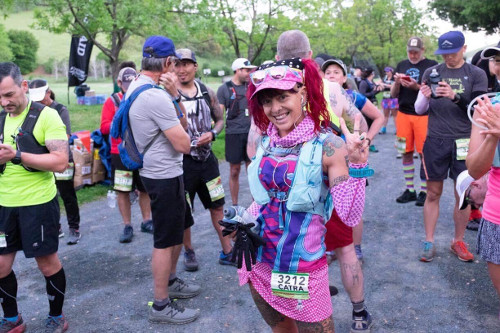 According to News, the colorfully dressed, tattooed California native turned to running after battling a drug addiction. Corbett cites the night she spent in jail after being arrested for selling meth as the turning point in her life. She is now 23 years sober and has participated in over 250 ultramarathons. She holds the overall record for completing the long-distance John Muir Trail twice for a total of 424 miles. She primarily follows a raw vegan and fruitarian diet.

Corbett is not the only plant-based athlete to shatter stereotypes. Earlier this year, the 51-year-old vegan Ultraman runner and cookbook author, Rich Roll, was named “fittest vegan” by Men’s Health. Further, this past week, vegan free-runner Tim Shieff set the fastest time ever for completing the obstacle course on the popular TV show Ninja Warrior UK, clocking in at under one minute.