Animal rights activists have been a driving force in making veganism more mainstream. From Olympic athletes to world-renowned civil rights leaders, here are nine vegan activists of color that are working to put an end to animal agriculture.

In 2017, at the age of ten, Genesis Butler became the youngest person to give a TEDx Talk. Butler’s talk, entitled A 10-Year-Old’s Vision for Healing the Planet, described why she went vegan and why others should, too. Butler stopped eating meat when she was just three years old, when her inquisitive nature led her to question where her food came from.

“According to many scientific studies, raising animals for food is the primary cause of global climate change, loss of biodiversity, pollution, and water shortage—just to name a few,” she said.

Butler has received a number of awards over the years for her animal activism, including PETA’s Youth Activist of the Year. In 2018, she founded her own nonprofit, Genesis for Animals, to help animal sanctuaries. She also appeared in the 2019 documentary “The Invisible Vegan.”

In 1988, at the age of 14, Seba Johnson became the first black woman to ski at the Olympics. She is also the youngest Alpine ski racer in Olympic history.

Johnson has been vegan since birth and is an ardent animal rights activist. She has given numerous speeches at animal advocacy events, including the 2014 Animal Rights National Conference.

Johnson was taught from an early age that “milk is for babies, whatever the species may be. One only drinks the milk of her or his mother,” she told LIVEKINDLY. 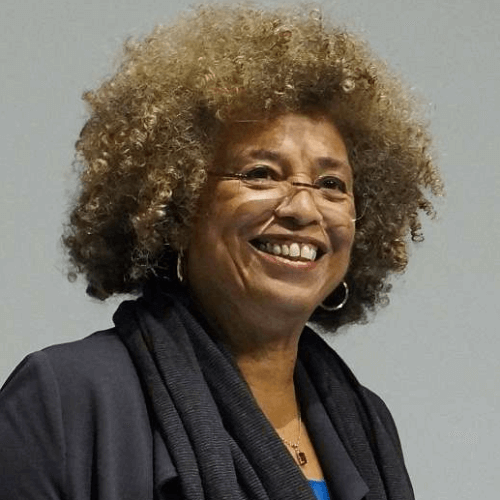 Early on, Davis also recognized the link between the oppression of animals and humans and went vegan to help promote animal rights by challenging animal agriculture and the world’s current food system.

At the 27th Empowering Women of Color Conference, Davis said the world must challenge the whole capitalist industrial form of food production.” She continued: “Most people don’t think about the horrendous suffering that those animals must endure simply to become food products to be consumed by human beings.“

“Seeing so many people come out to volunteer, so many people so happy with the food… I tend to get so angry with the injustice of food insecurity, of animal exploitation, that I really appreciate the times when I’m able to feel the joy in what we can do when we work together,“ Carrera wrote on Instagram.

Twenty-year-old Xiutezcatl Martinez is an indigenous climate activist, hip hop artist, and the youth director of the Earth Guardians, a nonprofit that “trains diverse youth to be effective leaders in the environmental, climate and social justice movements.”

At six-years-old, Martinez began speaking at events across the globe, including addressing the General Assembly at the United Nations in New York City. He has also spoken on panels with Bernie Sanders, Van Jones, Shailene Woodley, and Pharrell Williams.

Brenda Sanders is a food justice activist who works to bring affordable food to low-income neighborhoods in Baltimore. She is the founder and president of the Afro-Vegan Society, a nonprofit that aims to make a vegan lifestyle more accessible and approachable in predominantly Black neighborhoods.

Sanders is also the co-founder of Thrive Baltimore, a community center run by food, environmental, and social justice activists and the co-creator of Vegan SoulFest, an annual food and culture festival.

For the last two decades, Jaya Bhumitra has dedicated her career to promoting animal rights. Currently, she is the managing director of Animal Charity Evaluators—a nonprofit that promotes effective ways to help animals. Previously, Bhumitra has worked for animal rights organizations like Animal Equality, Compassion Over Killing (now known as Animal Outlook), and Mercy for Animals.

Bhumitra was also a board member for the Food Empowerment Project—a nonprofit organization that seeks to create a more sustainable world by redefining people’s food choices.

Dr. Amie “Breeze” Harper is a Black feminist scholar and founder of The Sistah Vegan Project—”a critical race feminist’s journey through the ‘post-racial’ ethical foodscape and beyond.”

Encompassing the idea of intersectionality, Dr. Harper has more than 15 years of career experience as a “diversity, equity, and inclusion expert.” She is also a cultural food studies scholar.

Dr. Harper created and edited the ground-breaking anthology, “Sistah Vegan: Black Female Vegans Speak On Food, Identity, Health, and Society.” She also wrote “Scars: A Black Lesbian Experience in Rural White New England,” which is about how “systems of oppression and power impact the life of the only Black teenager living in an all-white and working-class rural New England town.​”

Her latest book, Black Mama Scholar: On Black Feminism, Food Ethics, and Toddler Tantrums, will be released later this year.

Adewale is a research scholar, trainer, and a champion boxer and kickboxer. Omowale Adewale, who went vegan in 2013 after being vegetarian for 20 years, is also the founder of Black VegFest.

Adewale battled high blood pressure and chronic bronchitis for years before ditching meat, eggs, and dairy. He is now a certified plant-based nutrition expert and regularly talks about the importance of eating a healthy, plant-based diet. He is also the author of the 2015 book “An Introduction to Veganism and Agricultural Globalism.” The helpful vegan guide and cookbook includes a number of healthy recipes and plant-based nutritional tips.

“The food system must be changed by the younger generations who recognize our dwindling earth resources,” Adewale told LIVEKINDLY. He continued: “We exploit animals for livestock while it takes more fresh water and land to grow the livestock that we will kill later for our monetary greed.”

Audrey writes about sustainability, food, and entertainment. She has a bachelor's degree in broadcast journalism and political science.