A new study published in the journal The American Gut has suggested eating more plant-based foods, consuming fewer antibiotics, and being mindful of mental health can lead to a healthier bacterial microbiome in the gut.

The study conducted by the University of California San Diego’s School of Medicine, aimed to identify environmental factors in relation to gut health. It is a part of a larger ongoing global study that has analyzed bacteria in the digestive tracts of over 11,300 volunteer participants to date.

Anonymous people from 42 countries – including the U.S., Australia, and the U.K. – sent in samples of their fecal matter and completed a survey about their personal health, dietary regime, and daily lifestyle. 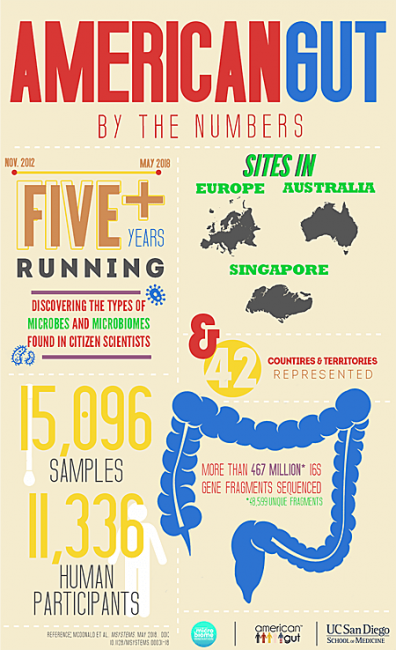 “It’s really amazing that more than 10,000 people — members of the public who want to get involved in science whether or not they work in a lab or have a Ph.D. — have mailed their poop to our lab so that we can find out what makes a difference in somebody’s microbiome,” project researcher Rob Knight, who directs the Center for Microbiome Innovation at UC San Diego said in a press release. He noted eventually the scientists want to eventually create a “microbiome GPS that tells you not just where you are on that map, but where you want to go and what to do in order to get there in terms of diet, lifestyle or medications.”

The study found that participants who ate more than 30 types of plant-based foods each week had a more diverse microbiome compared with participants who ate ten or fewer types of plants in the same time frame. Those with plant-heavy diets also had less drug-resistant bacteria in their microbiomes. Researchers accredit this observation to those eating less plant-based foods were likely to have been eating more foods from animals that had been treated with antibiotics or heavily-processed foods that contain antibiotics as a preservative ingredient – these two diet-related factors lead to antibiotic-resistant bacteria flourishing in the gut creating a less diverse microbiome.

Additionally, the researchers noted that people who reported experiencing mental health issues had a bacterial microbiome closely related to those with similar conditions, which differed from those without a mental illness.

Another study released earlier this month analyzed how the living bacteria and microbes present in the gut impacts health, metabolism, and immunity to disease. It looked at the fecal matter of gorillas and primates over a three-year-period and suggested human gut health can be improved with a plant-based diet, similar to that of our closest non-human relatives.