U.S. vegan fast-food chain Veggie Grill has launched a limited edition Spicy Sicilian Sausage Sandwich, made with the meaty plant-based Beyond Sausage by Beyond Meat.

“We’ve partnered with JUST and Beyond Meat to bring you two exclusive items for those summer cravings,” wrote Veggie Grill in a statement. The Spicy Sicilian Sausage Sandwich is made using the Beyond Italian Sausage, an Italian roll, and Spicy Pomodoro sauce. It’s served with crispy garlic parmesan fries. Veggie Grill says the new addition is available for a limited time from now onwards. The chain has also launched an all-day breakfast burrito with liquid vegan egg made by JUST.

In April, Veggie Grill joined the mounting number of American eateries serving up Beyond Meat products. The company’s burgers and sausages are reputable for tasting, smelling, sizzling, and even “bleeding” much like a conventional meat product would. Each sausage link contains 16 grams of plant protein and the alginate-based casing delivers the desired sausage “snap” upon biting into it. The casing on a meat sausage is often made using an animal’s intestine. 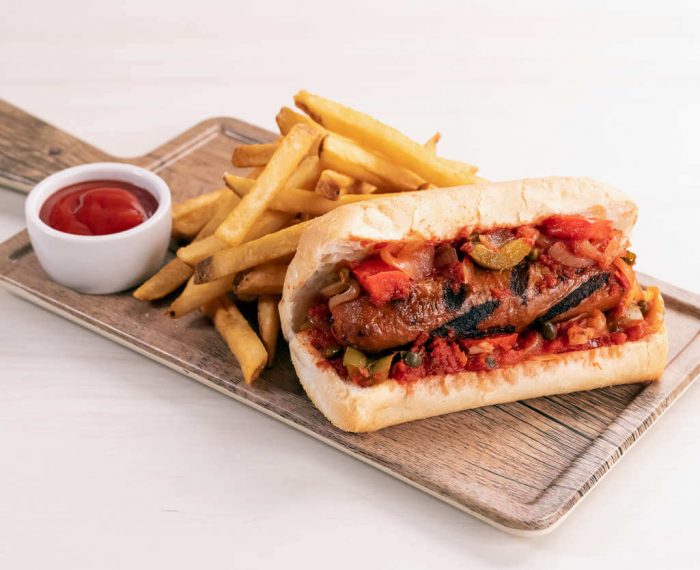 Following a trial run of the Beyond Sausage at two Californian Veggie Grill locations, the sausage rolled out to over 30 Veggie Grill restaurants nationwide. Its debut creation was named the “Wunderbrat,” an Original Bratwurst Beyond Sausage served “on a Pretzilla bun with Sierra Nevada vegan cheese sauce, caramelized onions, mustard, pickled red cabbage, and crispy fries.”

Across the U.S., vegan meat is taking the food industry by storm. In a video with TechCrunch in May, CEO of Beyond Meat Ethan Brown spoke out about how products such as the Beyond Sausage are changing how consumers eat. Josh Margolis, the owner of Rosamunde Sausage Grill, agrees with Brown. “[We] sold out,” he added to the tech publisher. “I guess it tells me that people have been waiting for this product to come out.”

“If you make a choice to put plant-based as a source of meat at the center of the plate,”said Brown. “You can affect [your health, the environment, and animal welfare] positively.”