You’d be hard pressed to find a person who doesn’t like pizza. Pizza is the food version of Ryan Gosling because NO ONE hates that guy and he’s also pretty tasty. Needless to say, pizza is a staple part of my diet which is why I was so excited about the opening of Virtuous Pie in Vancouver BC not too long ago.

Healthy pizza, you say? Well that can’t taste good. Who’d want a pizza made of plants?

Actually it turns out quite a lot of people. Judging by frequent queues of hungry souls tailing down the sidewalk from the restaurant door, it seems that many pie-fiends are on a quest to find the perfect balance between taste and health. Rest assured, VP is a place where these things coexist.

Virtuous Pie’s vision is to create positive change in the world—”one slice (or scoop!) at a time” (oh yes, they have vegan ice cream on the menu too..), and to me, any company with that kind of ambition is worth checking out.

From personal experience I would absolutely recommend trying the “Superfunghi” and “Stranger Wings”. In all honesty, everything on the menu sounded mouthwatering so I made my decision based on wittiest name. No regrets. 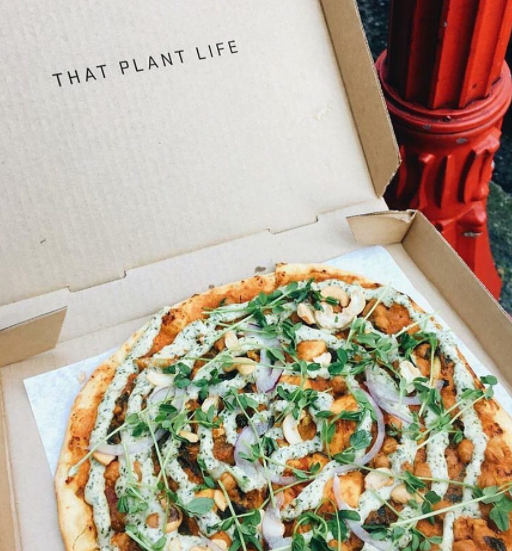 The Superfunghi is bianca (which I shamefully just had to Google) topped with cashew mozzarella, herbed potatoes (because who doesn’t like double-carbing?), truffle almond ricotta, wild mushrooms and rocket.

I remember reading some of the comments on VP’s media coverage back when their opening was announced, and seeing how particularly concerned the general public were about the idea of a pizza without cheese. Well, as a fully recovered cheese-addict, please do not take it lightly when I say, cashew cheese is The Shit.

Granted, it’s very different, but it is very, very good.

Stranger Wings is also pizza-bianca and is topped with spicy buffalo cauliflower (which is pretty much a meal in itself), crisp fried shallots, blue cheese drizzle and scallions.

Virtuous Pie certainly isn’t your average pizza place – I highly recommend checking it out if you are in the area (Chinatown in Vancouver or Ladds Addition in Portland USA opening soon).

P.S, Introverts and lazy people rejoice, there is an option for delivery

(Photo credit: Vitruous Pie, I was too immersed in pizza to take my own)