The new sandwich features cheddar-style vegan cheese, fresh tomatoes, sweet pickle, and a dollop of vegan mayonnaise. Although initially available at an introductory bargain price of £1.95 – cheap for the famously upmarket chain – the sandwich will retail at £2.60 from September 19th. 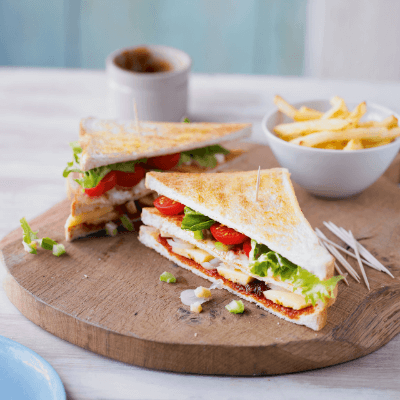 Reflecting this, in June, Waitrose reported that sales of vegetarian food are up 34 percent from last year. The chain announced the spike in sales shortly after becoming the first supermarket to launch a dedicated vegan section across all locations.

The sections feature 125 vegan ready-meals along with other meatless items, including products from the Happy Pear and the Vegetarian Butcher. Additionally, the supermarket has committed to increasing its total vegan and vegetarian assortment by 60 percent, to meet consumer demand. It is also the latest UK supermarket chain to commit to vegan labeling on its own-brand products. This means that, going forward, all of Waitrose’s own-brand vegan products will be labeled as such.

However, Waitrose is not the only UK-based store with plant-based sandwich offerings. British retailer Marks & Spencer recently revealed a vegan Christmas turkey sandwich as its latest festive food range addition. The No Turkey Feast sandwich, made with roasted soya protein, cranberry chutney and spinach, builds on the Marks & Spencer’s meat-free Christmas selection, which debuted last year. Socially conscious as well as festive, the brand will donate five percent of the sandwich’s profits to the homelessness charity, Shelter.

Elsewhere, the UK’s leading sandwich and food-to-go provider, Urban Eat, has extended its range of vegan sandwiches to include five new offerings, three of which are made with a generous serving of vegan cheese.