The Wall Street Journal (WSJ) has shown that plant-based living is far more than a fad and must be taken seriously, by hosting an event which served as a platform for the promotion of the growing need and desire for alternatives to animal-derived meat.

The Wall Street Journal Global Food Forum, which took place yesterday (10th October) in New York City, is an event where  “the editors of The Wall Street Journal… convene[d] leading executives and experts from across the agricultural economy and food industry to explore key challenges and opportunities in the business of food.”

The focus on yesterday’s talk was the intersection of food and technology, and the hope was that “[t]hrough dynamic interviews, the editors will draw on the knowledge of influential industry leaders to cover a range of issues of key importance to consumers, corporations and investors.”

Among those attending the event as key speakers were Sonny Perdue, the US Secretary of Agriculture, Scott Gottlieb MD, the Commissioner for the US Food and Drug Administration, Mark Young, Chief Technology Officer of the Climate Corporation, Uma Valeti the CEO and Co-Founder of Memphis Meats, and Beyond Meat’s CEO and C-FOunder Ethan Brown.

Some pretty bold and exciting statements about the future of food were mentioned at the event, and have since been shared via social media.

WSJ Business News tweeted, “‘[o]ur number one problem is production. Not that we can’t scale it, but that we don’t have enough,’ says Beyond Meat’s Ethan Brown #WSJFood“

Similarly, Heather Haddon, a reporter covering ‘food and farm’ for the Wall Street Journal, tweeted that Clean Meat Co.’s founder had said, “[d]emand is growing so quickly, we are running out of space for our equipment.” It’s promising that the move away from animal protein is growing to this extent.

One of the many reasons why it is important to move away from animal agriculture was also tweeted by WSJ Business News. They wrote, “[a]n inefficient use of farmland: About 80% of our arable land is devoted to feed for animals, says Beyond Meat CEO Ethan Brown  #WSJFood.” 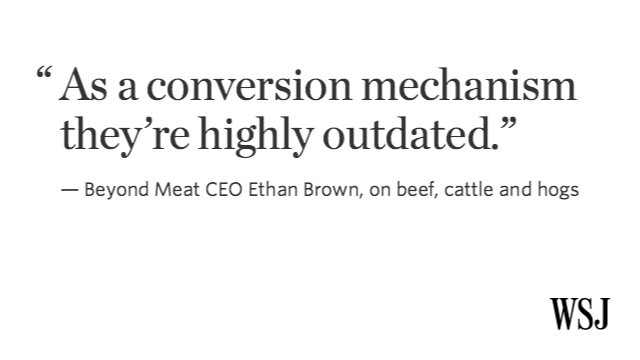 The words uttered by Uma Valeti, which opened the discussion, are words which seem to summarise the general direction taken in the event:

“Clean meat is the future of the world.”